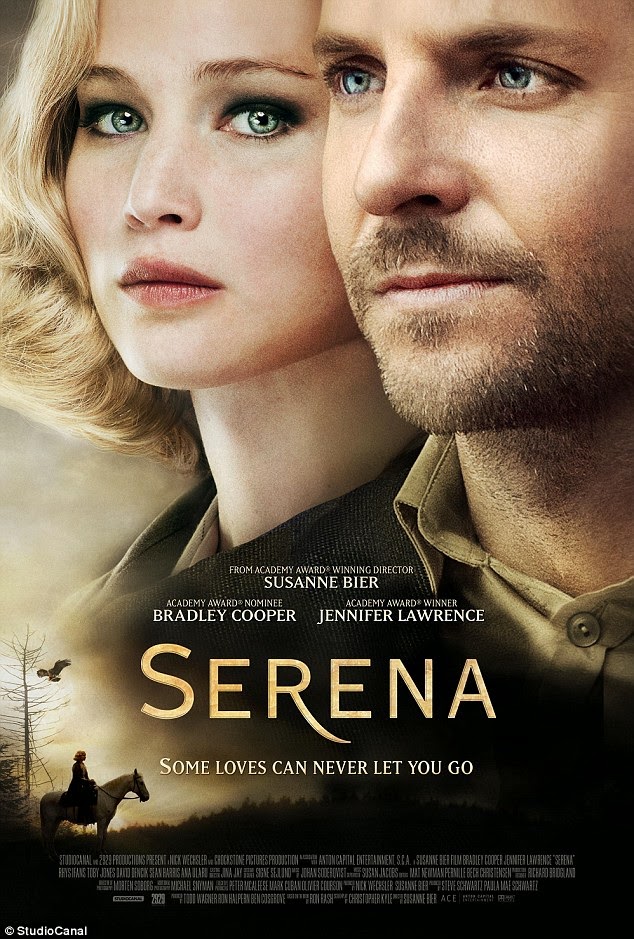 Within its first ten minutes, SERENA resoundingly establishes its credentials as a bad movie. Unless you have to watch the movie to review it, or you're a masochist (sometimes feels like the same thing), you should cut your losses at this point. The film is badly cast, badly written, badly directed, badly edited, and badly scored. At least cinematographer Morten Søborg does his job well, but no matter how well you film a traffic accident, it's still a traffic accident.

SERENA lurches awkwardly from one scene to another, its clunky dialogue filled with exposition that still somehow fails to adequately explain who its characters are, what they are doing, and why they are doing it. It's the kind of movie where the male lead, an unlikeable logging tycoon played by Bradley Cooper, takes one look at the female lead, a beautiful but tragic (and equally unlikeable) femme fatale played by Jennifer Lawrence, and not only falls in love immediately, but proposes to her as soon as he can chase her down on horseback. Said proposal is then followed by the obligatory, utterly unerotic, soft-focus sex scene. That whole sequence is so silly and poorly executed as to be at least worthy of a snicker, but for the most part the film doesn't quite reach the sublime level of “so bad it's unintentionally funny”, settling for dreary mediocrity instead.

Based on a best selling novel and packed with Award-winning or nominated A-list talent (Lawrence is an Oscar winner, Cooper has been nominated, and Bier's IN A BETTER WORLD won the 2010 “Best Foreign Language Film” Oscar), it's obvious that this period romance/melodrama set in the mountains of North Carolina was intended to be Oscar bait itself. Exactly how and why it failed so miserably has been the subject of much verbiage by critics. The one thing that's for sure is no one took the bait, and neither should you. 1 out of 4 stars.
Posted by Bob Ignizio at 12:00 AM