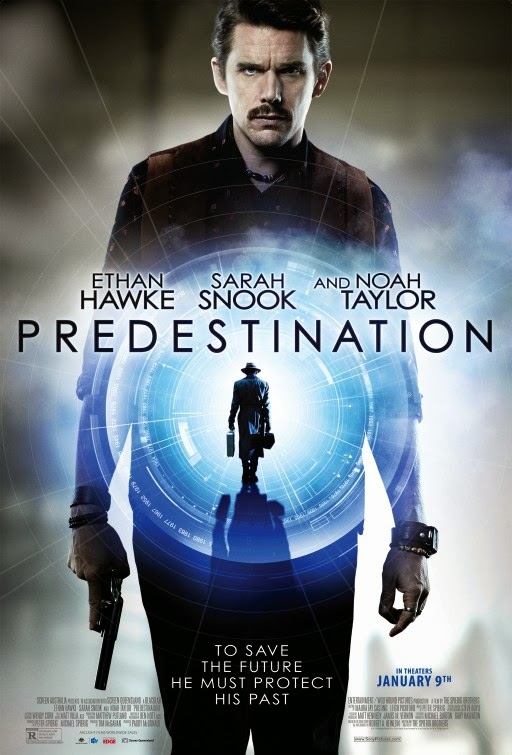 In most time travel stories, paradoxes are an unwanted byproduct that need to be either sheepishly explained or hastily swept under the rug; PREDESTINATION embraces them. Where the various internal contradictions that arise throughout something like the TERMINATOR franchise are treated as unwelcome nuisances best not thought about too deeply, here they are everything.

The film begins with an agent of the Temporal Bureau, some sort of time travel police charged with stopping particularly horrific crimes from taking place, failing in his efforts to capture a criminal known at the Fizzle Bomber in 1970s New York City. The agent does manage to prevent the bomber's crime, but is severely burned in the process. Recovering in the Bureau's headquarters in the future, the agent awakens with the face of Ethan Hawke. There he is given one final mission, one last chance to stop the Fizzle Bomber, before his forced retirement.

Sent back to 1970s New York, the agent takes a job working undercover as a bartender. One night a customer (Sarah Snook) walks in and orders a whole bottle of whiskey. The customer, who writes a “true confessions” column under the pen name The Unamarried Mother, bets the bartender that he can tell the most remarkable story the drink slinger has ever heard in exchange for free drinks. The bartender agrees, and The Unmarried Mother begins to relate his story, starting with the revelation that he used to be a she. And that's not even the most remarkable thing about his story. If true, it's a tale certainly worth at least one bottle of whiskey. How this eventually intersects with The Bartender's mission should be left for the viewer to discover. Suffice it to say, it's probably not what you think, but everything comes together in a clever and surprising way. This being the Cleveland Movie Blog, I'd also be remiss in not mentioning that part of the Unmarried Mother's tale takes place in Cleveland, OH circa the 1940s, although there's little about how it's presented here that couldn't be Anytown, USA.

The previous films by the Spierigs (UNDEAD and DAYBREAKERS) were notable for their imagination and visual style, but weren't particularly satisfying on a story and level. Here the brothers offer up a stronger narrative by faithfully adapting the 1959 short story “---All You Zombies---” by Robert A. Heinlein while still maintaining their visual panache. What changes the brothers do make to Heinlein's story feel natural, even as they serve primarily as a bit of misdirection to keep viewers from guessing the film's secrets too soon.

My only significant quibble with PREDESTINATION is that the Spierigs may have adapted Heinlein's story a bit too faithfully, going so far as to utilize its vision of the then-future rather than rewriting to reflect the now-past that viewers know. It's the one aspect of the film that took me out of the story. One can rationalize it as the way history wound up due to the machinations of the Temporal Bureau, but in a film that is already trying to sell us on a couple of fantastic premises, we don't really need the added distraction of another. To a lesser degree, it's also annoying to once again have a character who is supposed to be plain (described as flat out ugly in Heinlein's story) who isn't, the supposed plainness achieved by (you guessed it) having Ms. Snook wear glasses. While these are valid issues to raise, ultimately none prove fatal to what is a smart, stylish, and highly enjoyable film. 3 out of 4 stars
Posted by Bob Ignizio at 12:00 AM