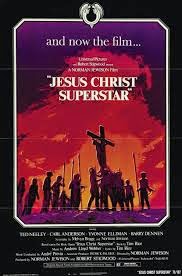 What makes the revival screening of 1973's JESUS CHRIST SUPERSTAR at the Cleveland Cinematheque so special? A few things. First, key actors from the film version of the Tim Rice/Andrew Lloyd Webber musicalization of the New Testament will be in attendance live, including Ted Neeley (Jesus), who has subsequently toured with the live version. Also scheduled at the Cinematheque are Barry Dennen (Pontius Pilate) and Bob Bingham (High Priest Caiphas).

Second, it's probably the last time you can get to see JESUS CHRIST SUPERSTAR in its original Universal Pictures form. To keep in step with the changing times in which we now live, all prints are going to be recalled, re-edited and re-released as MOHAMMED ROCKS, to please the rising Islamofascist market demographic among the ticket-buyers in world audiences. There will singing/dancing decapitated heads of hostages, the Jews will be the bad guys (still), and the finale will literally bring the house down - well, at least the World Trade Center towers.

Okay, just kidding in that last paragraph. But you just know there are Cleveland liberals, mainly in our college community, who would probably welcome such a reboot. I strongly suspect President Obama would.


The point is the world has changed a lot since JESUS CHRIST SUPERSTAR made its debut, after the Rice/Lloyd-Webber musical (and, most people forget, a hit rock-opera concept-album LP, just like the Who's 'Tommy') left its indelible imprint on the religious side of the "hippie" era. If you haven't given the disc a listen lately, I recommend it indeed, and Lloyd-Webber cooperated with Andre Previn on the film's orchestration.

Seen today, JESUS CHRIST SUPERSTAR's faint traces of quasi-psychedelia and the Age of Aquarius that render so many other late-60s/early-70s films unbearably campy are less evident than they might have been. The G-rated feature has actually aged pretty well, granted the bold stylistic choices brought to the material by director Norman Jewison, hot off doing the (more traditional) film version of another blockbuster musical, Fiddler on the Roof.

Chiefly, Jewison framed the whole production (JESUS CHRIST SUPERSTAR, we're talking) in contempo terms, shooting on location in Israel (and in between a series of wars with Egypt, no less), using caves, ancient temple ruins and skeletal scaffolding for the minimalist sets, and putting his actors in modern dress. In literalist terms, they're a multi-ethnic troupe of nobody-over-30 hipster performers in bell-bottoms who arrive by bus in the desert, unload their costumes and props at the outset, and perform the whole musical that you see. Rather a cool notion - although the Stephen Schwartz musical GODSPELL, released as a film via Columbia also in 1973, did that too, only in a mysteriously deserted New York City.

It's also actually pretty wild, even by modern standards, that the main character in JCS, and in many ways the most fully realized and sympathetic, is Judas Iscariot, played by the late, great Carl Anderson, as a revolutionary type and Jesus' official second-in-command, dismayed about all the messiah talk and fears that the wrath of the whole Roman Empire will come down on their heads. Dennen's Pontius Pilate also manages to register, as a mocking official who comes to rue the persecution and execution of the so-called King of the Jews on his watch. Ted Neeley's tortured, self-doubting Jesus has been criticized as "whiny," but he anticipates the human-scale Christ to be dramatized by later filmmakers, most notably Martin Scorsese's novel adaptation THE LAST TEMPTATION OF CHRIST. As with just about every Bible epic, those who complain about lack of background, motivation, character development and downbeat ending [SPOILER ALERT: no resurrection is depicted; maybe Rice and Lloyd-Webber are saving it for the sequel) should be told it's partially their own fault for Not Having Read the Book. In this case, THE book.

But it is true that most of the actors are dwarfed by the Israeli landscape, props (dig those tanks!) and settings, with Jewison often using performers, especially the limber Anderson, as graphic/pictorial elements in the widescreen spectacle. The big screen is definitely the way to see JESUS CHRIST SUPERSTAR. And to have several cast members present is a divine bonus.

And, let's face it, a meet-and-greet with Ted Neeley is the closest to meeting Jesus that most folks in University Circle will ever get. Sorry, the devil made me write that line. (3 out of 4 stars)

Posted by Charles Cassady Jr. at 8:49 AM