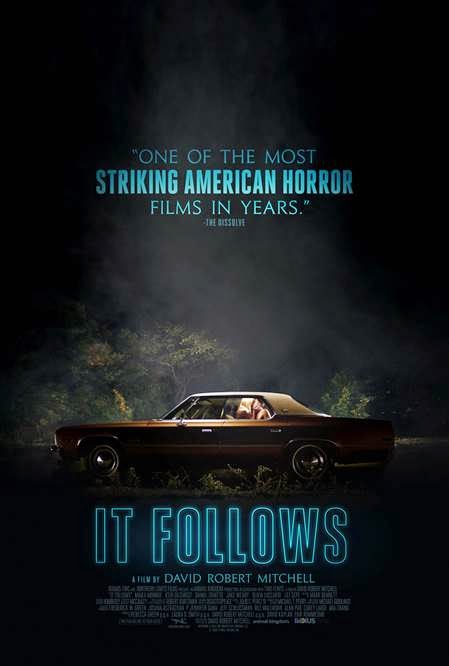 Unlike HALLOWEEN and its ilk, though, IT FOLLOWS doesn't follow the old formula where the bad girls and boys all get killed and the virgin makes it to the end. Rather, it takes a more realistic and sympathetic view of teen sex. It's protagonist, Jay (Maika Monroe), isn't branded as a slut for wanting to have sex with her boyfriend Hugh (Jake Weary); she's just a normal teenage girl.

Unfortunately for Jay, Hugh has been cursed to die at the hands of a malevolent supernatural creature. His only hope is to have sex with someone else, which passes the curse on to them. Hugh explains this to Jay after they've had consensual sex (the part where he drugs her with chloroform and takes her to an abandoned parking garage being slightly less consensual).

Make no mistake, Hugh doesn't want the creature to kill Jay: once she dies, the mosnter goes back to tracking him down. Rather, he wants Jay to continue passing the curse farther down the line by having sex with more people, something he figures the popular, attractive girl should have no problem doing. After what can only be described as a hollow apology, Hugh drops Jay off at home and drives off.

With all the parents conveniently out of the picture (par for the course in movies like these), it's up to Jay, her sister Kelly (Lili Sepe), and their friends Yara (Olivia Luccardi), Paul (Keir Gilchrist), and Greg (Daniel Zovatto) to figure out a way to stop the curse, if that's even be possible.

Writer/director David Robert Mitchell (MYTH OF THE AMERICAN SLEEPOVER) has crafted a horror/suspense film that's part late seventies/early eighties horror film and part modern teen indie drama. The soundtrack by Disasterpeace pulses with John Carpenter-esque synths, but rather than bold primary colors the cinematography opts for washed out pastels. The living curse in human form is like Jason Voorhees infused with Cronenbergian body horror, but rather than the usual antics of dumb disposable teens looking to score, the film spends a lot of time focusing on who its characters are as people and their relationships with each other.

It can be slow going at times, but ultimately IT FOLLOWS finds a balance between its different sides. The body count is low and gore is relatively tame, but writer/director David Robert Mitchell compensates for it by skillfully building suspense and creating a pervasive sense of dread. 3 ½ out of 4 stars.
Posted by Bob Ignizio at 12:01 AM