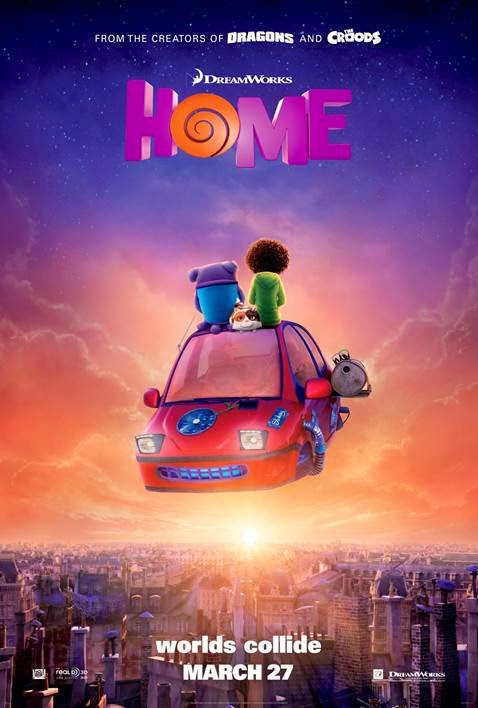 In the new animated feature HOME, the Boov are an alien race renowned for running away from danger. They positively excel at it. Which would probably be okay as far as that goes if it didn't lead them to subjugate other, less advanced planets whenever they need to flee their previous world due to the imminent arrival of The Gorg, an more powerful alien race that has it in for the Boov.

The Boov's most recent choice for a place to live is, you guessed it, Earth. Under the direction of their ruler Smek (Steve Martin), they round up all the humans and deposit them in Australia. The Boov are all more or less alike except for Oh (Jim Parsons), whose name comes from the exclamation of dread everyone else makes when they realize he's about to engage them. This doesn't stop Oh from trying to be friends with everybody, especially Kyle (Matt L. Jones). To this end, Oh sends an e-vite to a party at his new home that inadvertently goes out to the whole galaxy, including the Gorg. There's a chance to stop the message, but unlike the rest of the Boov, Oh has changed his password from the default “password”, and no one can figure out what it is. Nor can they ask Oh, who true to his kind has gone into hiding rather than face the trouble he's in.

Oh finds an unlikely ally in Tip (Rihanna), evidently the only human left behind when the Boov did their mass relocation. She needs Oh's help to find her mom (Jennifer Lopez), and he needs her help to do what the Boov do best and run away. But maybe, just maybe, these two can learn from each other and save the day. Do ya think?

Look, HOME is exactly what you expect from Dreamworks animation division, which routinely churns out serviceable second and third rate Pixar knock-offs. This one is definitely in the third rate category. If you want to get critical (and I guess I should, since that's kind of the idea of writing a review), the story is pretty half baked, the jokes are tired, and the soundtrack (heavy on the Rihanna, natch) not my cup of tea. It's not bad enough for me to muster up any real venom, though, and it did its job of keeping my four year old son entertained. 2 out of 4 stars.
Posted by Bob Ignizio at 12:01 AM