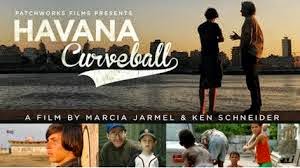 
See all posts about the 39th Cleveland International Film Festival

Imagine: a husband-and-wife team of filmmakers showcase their own school-age son as subject of a feature. Yeah, ultimate stage parents. Yeah, the kid stays in the picture, all right. Sounds like a real recipe for disaster, or have we all forgotten AFTER EARTH?

The San Francisco-based filmmakers' son and star is Mica Jarmel-Schneider. Shortly after his Bar Mitzvah, the school-ager wants to do something selfless and heroic that will mark him as a mensch. Combining his affection for baseball with concern over poverty in Latin America, Mica is struck by the plight of Cuba, a baseball-loving nation still subject to harsh, decades-old trade embargoes by the anti-Communist United States. Even Havana's top team has only one helmet among the lineup.

First Mica rounds up a cache of donated bats and balls and tries to expedite them to Cuba via Canada (a reminder that Canadian filmmaker Michael Rubbo, back in the early 1970s, had the access to make the documentary WAITING FOR FIDEL, a rather arch send-up of the dictator and something of a precursor to ROGER & ME). When Mica can't confirm the arrival of his shipment, the boy and his parents (who wisely stay offscreen or in nonspeaking roles most of the time) personally visit the island, via a faith-based American charity organization.

At last Mica is able to bring more gear, play in actual games on the taboo island, and meet Cuban fans and players - and it is quite amazing for us money-grubbing, celebrity-worshipping Yankee- imperialist pig-dogs, that even leading stars of Cuba's diamond have ordinary, comrade-in-the-street proletarian lives. Just like everyone else. Yet Mica also realizes the limits and fallibility of his one-mensch relief effort.

Except for the overarching sense of Washington DC clinging blindly to an exclusionary, sorehead Cold-War relic foreign policy, there are no detailed discussions of politics or Castro, one way or another (perhaps a severe blind spot). But a brief, eye-opening visit to Cuba's small Jewish community is an unexpected bonus. HAVANA CURVEBALL may not be a home run, but the picture certainly rounds a few bases that most American viewers thought we'd never get to without stealing - either via US military invasion or a right-wing coup via Miami exiles and/or mafiosi. (3 out of 4 stars)