Gangs of Wasseypur (March 8th at the Cleveland Cinematheque) 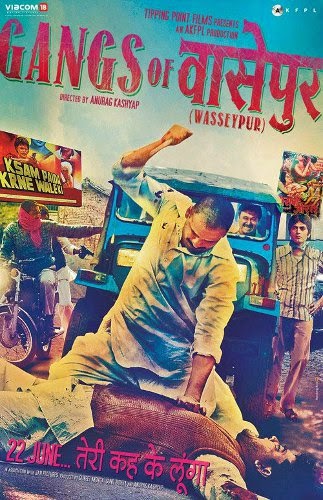 My ignorance of Bollywood cinema (outside a few ubiquitous brightly clothed, dance-heavy stereotypes) is matched only by my sucking void of knowledge pertaining to India's socio-political history. So it's a marvel that through gritty, propulsive gangster film dialectics alone Anurag Kashyap's GANGS OF WASSEYPUR held me fully in its sway for an imposing five-hour-and-twenty-minute runtime.

Filmed as a single cinematic epic, but split KILL BILL-style into two distinct, serial films (PART 1 and PART 2) by its original Indian distributor, GANGS spans 75 years and 3 generations, telling the story of the Khans, a crime family whose cunning, brutal patriarchs carve a path of violence and extortion across decades of social and political strife.

Narrated by family cousin and caretaker Nasim (Piyush Mishra), the film kicks off in 2008 as an armed mob lays siege to the Khans' fortified manse. As the conflict peaks, GANGS flashes back to the 1940s, where Shahid Khan (Jaideep Ahlawat), posing as the legendary robber Sultana, undertakes an increasingly brazen series of train robberies.

After the fall of the British Raj, Shahid's reputation secures him work as a muscleman for a coal mining company. It's here that Ramadhir Sing (Tigmanshu Dhulia), a crooked union leader extorting his way up the political ranks, recognizes Shahid's potential to upset the tenuous local power balance – an observation that quickly turns Sing into the Khan family's most powerful and enduring enemy.

And so the Khan family clambers ever closer to infamy.

While both parts of GANGS OF WASSEYPUR are compellingly paced and replete with action and intrigue, PART 1, which spans the 1940s to the 1990s, feels visually more akin to classic crime and adventure films - like those of Sergio Leone or Francis Ford Coppola - clean and fast, with a deep fascination and respect for history, and a visual focus on narrative.

PART 2, which chronicles Sadar's son Faizel's (Nawazudd in Siddiqui) drug-addled rise to power and continuing feud with the aging Sing, adopts the style of its setting, casting the late ‘90s and early oughts in the fast motion, quick cuts and dark wit of early Danny Boyle and Tarantino. Ultimately returning to the nighttime raid that began PART 1, and chronicling the rise of gun manufacturing in India, PART 2 culminates in one of the most satisfying, spectacular cinematic shootouts in recent memory.

While Kashyap is obviously expertly versed in the Western film canon, GANGS' foundation is staunchly Indian, with deep, loam-heavy roots firmly planted in Bollywood history. The soundtrack alone boasts a startlingly diverse and daring collection of Indian music ranging from a number of classic Bollywood numbers (thank you, subtitler, for providing prompts such as [classic Bollywood song]) to pulsing EDM cuts.

Likewise, in the genre-mashing tradition of Bollywood cinema, GANGS plies its car chases and gun battles with a liberal application of romance and comedy.

PART 1 devotes a good chunk of time to Sadar's romantic entanglements, first with his rightful wife-by-arranged-marriage, Nagma (Richa Chadda), and then with the young Bengali temptress, Durga (Reeme Sen). Alternatingly sweet, sexy, sad and horrific, the perilous emotional traverse across trysts, marriages and affairs are as engaging and striking as any of the beak-wetting treachery and muzzle flash of the mob storylines.

Likewise, a scene at the end in which a gaggle of burner cell-juggling thugs attempt to coordinate a hit while simultaneously weighing in on their staked-out target’s grocery purchases is amusingly dark and absurd.

The closest American analog in scope, topic and visual panache to GANGS OF WASSEYPUR would probably be Coppola's GODFATHER films and Scorsese's GOODFELLAS. As with all great films, though, a comparison isn’t needed. Kashyap himself comments on the universality of cinema and the indelible mark it forges upon the human experience through multiple scenes in which the carousing young toughs and one-day Dons quit the scorching Wasseypur streets for movie theater seats, losing themselves in Bollywood crime thrillers, love stories and comedies.

Then there's the scene where an aging Ramadhir Sing comments that what makes him such a successful mobster is that he never attends Bollywood films. He goes on to explain that all the young gangsters make the mistake of emulating their cinema heroes, only to become victims of their own carefree gangland fantasies. In this moment, with these words spoken by the mouth of a villain, we are at once reminded of the magnificent power of art and overcome with a detesting pity for those who deny its allure and belittle its grandeur.

Watching GANGS OF WASSEYPUR, it's great to see a sprawling epic that truly justifies its runtime, and even greater to experience a story that matches the ambition and skill of its teller. (3 ½ out of 4 Stars)
Posted by Matt Finley at 12:00 AM