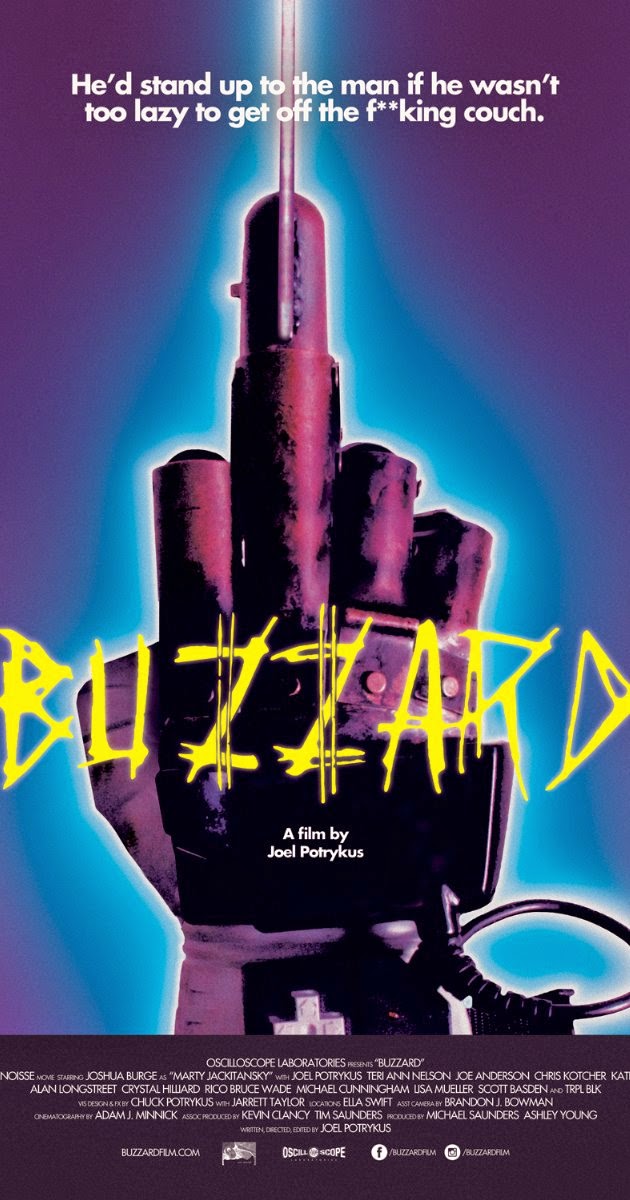 With his new, lo-fi film BUZZARD, Joel Potrykus revives a nearly forgotten genre, the '90s indie slacker movie. The film’s lead actor, Joshua Burge, with his mournful eyes and hangdog visage, even looks like a young Steve Buscemi, star of so many of those long-ago indies.


The third installment of the writer-director's “animal trilogy” (after  APE and a short called “Coyote”), the film centers on Marty, a disaffected office temp and petty grifter who descends into violence with a Nintendo Power Glove he has outfitted with Freddy Krueger knives. Grinding, angry heavy metal music underlines the film's nihilistic mood.

Like Potrykus' previous efforts, the movie is set in his native Grand Rapids, Michigan. Marty works, but just barely, as a temp at a bank's mortgage department, and as the movie opens, he is trying a minor scam on a branch of First Federal, the bank where he works.

In the first of many similar scenes, Marty sits before the desk of a banker and closes his small savings account, then asks to open a checking account in order to get a $50 promotion. It's a trivial scam, but it's just one of many Marty has up the sleeve of his black “Demons” T-shirt. He gashes  his hand so he can fake a workplace injury. He orders office supplies through work and returns them to a store for cash. He's a small-time con man whose vague anti-authoritarianism and petty sociopathy remind me of people I knew when I worked in mall stores in the actual 1990s. Oh! the schemes I heard about, including one involving hardware store employees stashing new appliances in trash bins to be later retrieved by friends, and a bookstore clerk who staged an armed robbery so he could steal the contents of the cash register. Minimum-wage jobs tend to breed resentment that, in some people, curdles into criminality.

When Marty's boss hands him a stack of refund checks to be mailed to customers, Marty decides instead to steal them. (He's been told, erroneously, by his mom and a bank teller that he can “sign over” checks to himself.) His fellow temp and friend Derek (played by director Potrykus) warns him that he'll get caught, but Marty is undeterred.
Soon it begins to look as though he will be caught, and Marty hides out in Derek's basement, which nerdy Derek has dubbed “The Party Zone.” The film briefly becomes a kind of nerd-buddy comedy as the two friends quarrel, play video games, eat Bugles and frozen pizza, and guzzle two-liter bottles of Mountain Dew.

The tables are turned on Marty as a convenience store clerk scams him out of $5, and he begins to seethe. He departs Derek’s basement, armed with his Freddy Krueger glove, and hits the road to Detroit, where he checks into a fancy hotel, and then a cheap motel, where he tries to work a scam. A confrontation with the manager of a check cashing store, where he is trying to cash the stolen checks, exposes the hollowness of his revolt. His crime, he argues, is no worse than the crimes committed by big business.“The whole.... corporate thievery....!” he sputters lamely. Marty is truly a rebel without a cause.

And that is the main problem with the movie: we have no idea what Marty is protesting, what his life is like, or what led him to become a con artist. The filmmaker evidences no particular point of view about his “angry young man”  -- is he a righteous antihero, or just a creep? Potrykus’ camera spends inordinate time on closeups of Marty’s woebegone face and lingers for an eternity on Marty, atop a hotel bed in a white robe, sloppily devouring a plate of spaghetti and meatballs. (The studio calls this, tongue presumably in cheek, “the sexiest spaghetti-eating scene since Lady and the Tramp.)

There is a certain enjoyable suspense in the scenes in which Marty works his scams on various functionaries (bosses, bankers, hotel clerks, cashiers, doctors) who are surprisingly compliant with his schemes. (“Just go to the ATM,” says a cheery bank teller when Marty proffers stolen checks made out to other people.) The character seems misjudged: if Marty were even a little charming, rather than loathsome, his absurd success at gaming the system would be a lot more entertaining. Here and there are faint echoes of NAPOLEON DYNAMITE or Kevin Smith's CLERKS films (low-paid slackers, jokey antagonism between co-workers, petty criminality), but without those movies' heart or hilarity.

The movie is most successful as a nostalgia trip, now that '90s nostalgia is a thing. It's a defiantly atavistic throwback to a spare, slashing style of filmmaking that has latterly fallen out of fashion. 2 1/2 out of 4 stars.
Posted by Pamela Zoslov at 12:07 AM