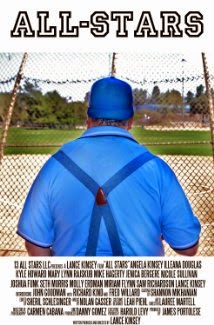 With his debut feature as director, veteran character actor Lance Kinsey (perhaps best known as Proctor in POLICE ACADEMY 2 through 6) opts to follow in the mockumentary footsteps of Christopher Guest's WAITING FOR GUFFMAN, BEST IN SHOW, and A MIGHTY WIND . ALL-STARS may not be reinventing the wheel, but it's a consistently funny film about a girl's softball team, their often obnoxious parents, and the put-upon coaches and officials trying to achieve the impossible task of making everyone happy while still finding a way for the kids to have a good time.

Kinsey knows this world well, having coached his daughter's softball team, so it only makes sense that he casts himself as the coach of 10 year old girl's team The Hairy Ketchup Bottles. The rest of the adult characters are brought to life by a first rate cast of character actors, many of whom, like Kinsey, have roots in improvisational comedy. The film's bigger names include Fred Willard (a regular in Guest's films), Illeana Douglas (TO DIE FOR, GHOST WORLD, “Six Feet Under”), Angela Kinsey (“The Office”), Mary Lyn Rajskub (“24”), and Nicole Sullivan (“Mad TV”). Really, though, just about everyone is the kind of actor who has a ridiculously long list of TV and film credits so, yes, you probably have seen them in that one thing.

When you've got a largely improvisational piece like this, there's always a risk that the resulting film will be kind of formless and meandering. Thankfully Kinsey understands that even a mockumentary needs to be shaped into something that tells a story. ALL-STARS has a nice flow to it, and doesn't overstay its welcome.

I'm sure some will call ALL-STARS derivative of Guest's work, but no one has a monopoly on a genre or filmmaking technique. What matters to this critic is that the resulting film delivers both in terms of laughs and genuine insight into its subject. If you've ever been around a youth sports league in any capacity, the film should deliver plenty of knowing laughs for you. Some jokes might even make you feel a bit uncomfortable depending on how close they hit to home, but you'll laugh nonetheless. 3 out of 4 stars.
Posted by Bob Ignizio at 12:00 AM