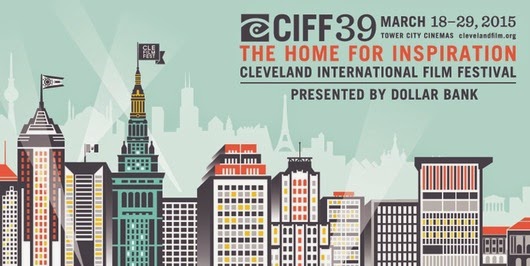 
Media partners include Akron Beacon Journal, Akron Life Magazine, Record Publishing Company, 89.7 WKSU, Rubber City Radio Group, and WNIR 100FM. Community partners include Akron Art Museum, Akron-Summit County Public Library, Downtown Akron Partnership, and The Nightlight.  For full details, please visit clevelandfilm.org/akron.
Tickets are now on sale at clevelandfilm.org for all CIFF39 screenings. Ticket prices for films are $13 per film for CIFF members and $15 for non-members.  Tickets are available online at clevelandfilm.org, by telephone (1.877.304.FILM), in-person at the Film Festival Box Office in the lobby of Tower City Cinemas, or by mail using the Program Guide order form.
Program Guides are available throughout the region, including all Dollar Bank locations.
The Cleveland International Film Festival is supported in part by the residents of Cuyahoga County through a public grant from Cuyahoga Arts & Culture.
Posted by Bob Ignizio at 12:00 AM