Vertigo, with the Cleveland Orchestra (February 13th at Severance Hall) 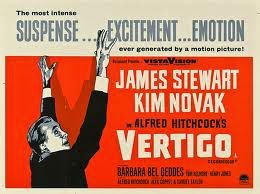 For Valentine's Day week, why not take your sweetheart to romantic University Circle, to hear an aphrodisiacal performance by the virile and sensuous Cleveland Orchestra. All while watching a feature film that tells you women are wicked deceivers and love is a diabolical illusion. Happy Valentine's Day from the Cleveland Movie Blog.


VERTIGO is certainly equal with PSYCHO as Hitchcock's most intensely analyzed work. Ostensibly it's a psychological thriller with occult overtones and some classically kitschy nightmare sequences. Hitch regular and all-American leading man Jimmy Stewart - showing more dark undercurrents of unrequited lust and perversity than his fans usually gave him credit for - is Scottie Ferguson, a San Francisco police detective suffering acquired fear of heights that mean his retirement from the force. More or less turning private eye, Scottie takes an outside assignment to trail a mystery woman (a mirage-like Kim Novak) who may be a reincarnation of an aristocrat from old California days, who may be about re-enact her own death - from a fall from a tower, a place that triggers Scottie's phobias in the worst way.

Nothing is quite what it seems, and the whodunit murder plot (transplanted from a French thriller novel) is distantly secondary to the themes of sensual obsession, feminine unattainability, illusion, memory and striving to regain lost desire. A nifty murder angle doesn't hurt, and neither does a full string and horn section. The woman problems - well, that's up to you to deal with. Don't say you weren't warned.