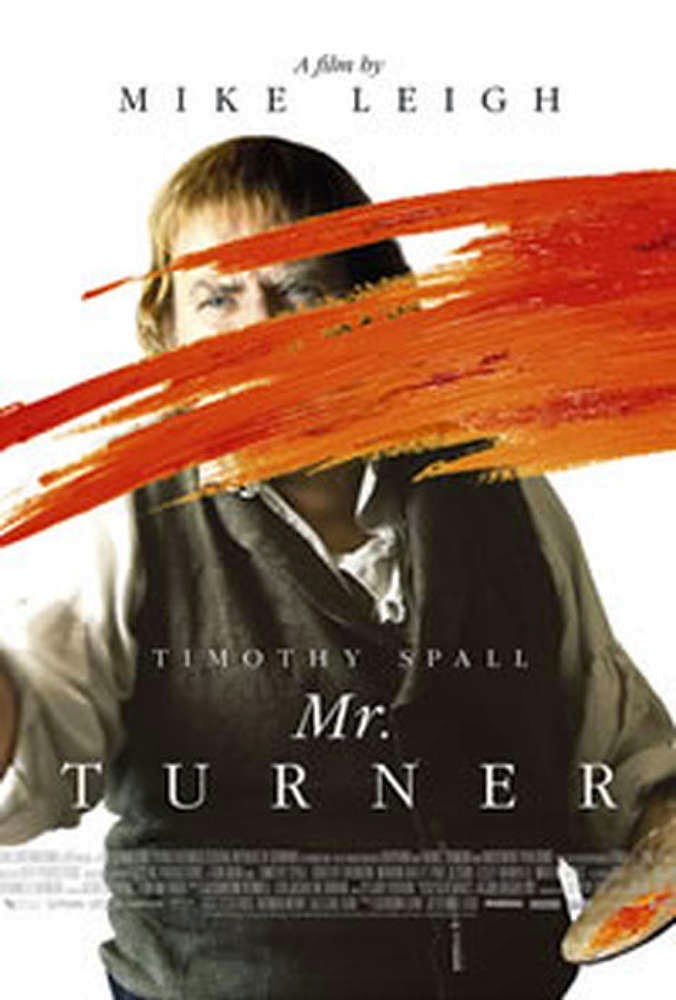 MR. TURNER isn’t the most ingratiating movie Mike Leigh has ever directed. In that sense, it’s a lot like the curmudgeonly true-life figure, 19th century British landscape painter J.M.W. Turner, who gives the film its title. It’s as far removed from the chronicles of contemporary middle-class life Leigh normally specializes in (LIFE IS SWEET, ANOTHER YEAR, SECRETS AND LIES) as a movie can be. Yet, like Leigh’s equally splendid Gilbert and Sullivan biopic, 1999’s TOPSY TURVY, it’s another Leigh masterwork.

At a time when even the most ardent North American cinema buff considers foreign films culturally irrelevant, I’m not sure what theatergoers will make of MR. TURNER. While it’s in English, subtitles would probably come in handy with some of the thick, well-nigh impenetrable British accents. And its stately rhythm and two-and-a-half hour running time will surely incur the wrath of those who think that movies are merely time-killing entertainment. But since Leigh is one of the greatest living filmmakers, I pray there’s a sympathetic audience out there willing to give it a try.

When we first meet Turner (memorably played by Leigh regular Timothy Spall who won the Best Actor award at Cannes for his performance), he’s just returned from a brief trip. The brusque—to put it kindly—manner with which he greets his doting, servile housekeeper (Dorothy Atkinson) tells you everything you need to know about the man. (Some quickie, fully clothed sex is involved.) Turner’s elderly father (the wonderful Paul Jesson) lives with him, and he seems like such a dear old soul it’s amusing to think they could actually share the same bloodline.

As chatty and affectionate as Turner is with with his peers at the Royal Academy, he’s less than congenial to his former wife (a fiery Ruth Sheen), and doesn’t even bother acknowledging his two grown daughters. Watching Turner’s simmering disdain for the primary women in his life, it’s a bit of a shock to see his more courtly side emerge in a discussion on the properties of light with Scottish scientist Mary Somerville (Leslie Manville).

During an impromptu sojourn to the bucolic seaside town of Margate, Turner makes the acquaintance of Sophia Booth (Marion Bailey) who runs a cozy bed and breakfast with her husband. On a return visit, Turner and the newly widowed Mrs. Booth embark upon a surprising, and surprisingly affectionate, relationship. He even adopts her last name in an attempt to remain anonymous. (Turner’s artistic celebrityhood apparently follows him everywhere.) In the process, he softens considerably and becomes—dare I say it?—an almost sympathetic figure.

Leigh’s collaborative approach to directing—a finished script emerges only after months of rehearsals and improvisations in a workshop-type environment—is reminiscent of the late Robert Altman. But Altman’s dyspeptic worldview and cynicism are far removed from Leigh’s unstinting humanism. The subtle layering of his characters, and the unexpected dimensions they reveal to us over time, is as fascinating to the viewer as it probably was to Leigh and his actors during their preproduction journey. So it is with MR. TURNER.

This utterly remarkable film would be inconceivable without the yeoman contributions of Spall and longtime Leigh cinematographer, Dick Pope. Spall’s braying, roiling, damn near convulsive force of life performance is the very definition of “tour-de-force.” I can’t imagine another actor in the role. And Pope achieves something equally astonishing here. He somehow manages to imbue the film’s settings (natural and otherwise) with the same painterly eye Turner brought to his work. Rarely have I seen a film about an artist that’s as tactile and, well, artisanal-seeming as this. (Altman’s 1990 Van Gogh biopic VINCENT & THEO comes close.)

A work of art about a great artist? That’s definitely not something you see every day. 4 out of 4 stars.