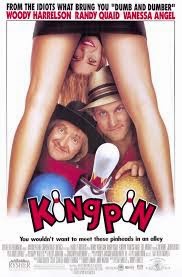 The Cleveland Cinematheque, in a change of pace, is showing KINGPIN, a mainstream Hollywood PG-13 comedy crowd pleaser, as a tie-in to the opening in University Circle of the Corner Alley, a novelty restaurant chain that combines fine food with bowling.

It also sends the message to students at the various colleges and arts institutes around University Circle that, once they graduate into this economy, they'll be lucky if they can even get a minimum-wage job, part-time (so no benefits) as a food-server or a pin-setter. Oh, wait, machines do all the pin-setting now. Well, there's still food service. Have a nice time paying your titanic student loan debt with that.

Come to think of it, the Cinematheque actually did show TITANIC once, true story. Unlike that blockbuster, however, KINGPIN released a year earlier in 1996, scored a gutterball with ticket-buyers, for some reason. Thus It has has
deservedly gone on to `cult' status.

Woody Harrelson, with a bad comb-over, leads the cast as Roy Munson, once a rising star in the bowling leagues in the 1970s (dig him in his disco garb) until he came up against cocky champ Ernie McCracken (Bill Murray). McCracken tempts him into running a scam against some tough guys that gets poor Munson so roughly handled that his bowling hand, shoved by a lynch mob into a ball-return machine, is torn off and replaced by a hook (which Roy covers with a grotesque rubber hand most of the time).

More than a decade later the balding, down-on-his-luck Munson's very name is synonymous with failure, and he needs rent money badly. While on a futile trip to sell bowling supplies, he encounters Ishmael (Randy Quaid), a hulking Amish `youth' who secretly practices bowling on the sly, and whose declared scores suggest that he's an undiscovered bowling phenom.

The prospect of a million-dollar bowl-off in Reno makes the desperate Munson go heroic lengths (like trying to pass as Amish) to persuade Ishmael to violate tenets of his religion and enter the lucrative tournament. While trying to bowl for bucks at a mafia-type guy's private alley, they flee with the bad guy's sexy moll (Vanessa Angel), who competes with Munson to control guileless Ish's destiny.

The gradual corruption of the innocent, oversized Amish `lad' is hysterical indeed. And watch for the scene with the littering Indians! Probably the best gag of the year (you internet kids, reading this, who probably thought Ronald Reagan was still president in 1996, won't get it).

KINGPIN is the Farelly Brothers at what I consider their inventive best, with sneaky, imaginative and beautifully-timed gags. Their trademark gross-out humor is my favorite type, the brand that works best because of the unspeakable things it only hints at, but doesn't show (although Harrelson's vomiting scene does tend to go a little far). Bill Murray's sleazoid villain is wonderful, and there's a priceless subversion of an standard `underdog' sports-drama ending. Why this movie didn't do THERE'S SOMETHING ABOUT MARY-sized business I really don't know. But I appreciate the lack of a lousy sequel or TV-cartoon spinoff.

Amazing fun fact: the Professional Bowling Association (PBA) in a commercial slump itself at the time, and dropped from TV coverage by the networks, cooperated with the making of KINGPIN in order to liven up its stodgy image, a component of the amusing bowling feature documentary A LEAGUE OF ORDINARY GENTLEMEN, if you get a chance to see that one. (3 out of 4 stars)