Human Capital (February 26th and 27th at the Cleveland Cinematheque) 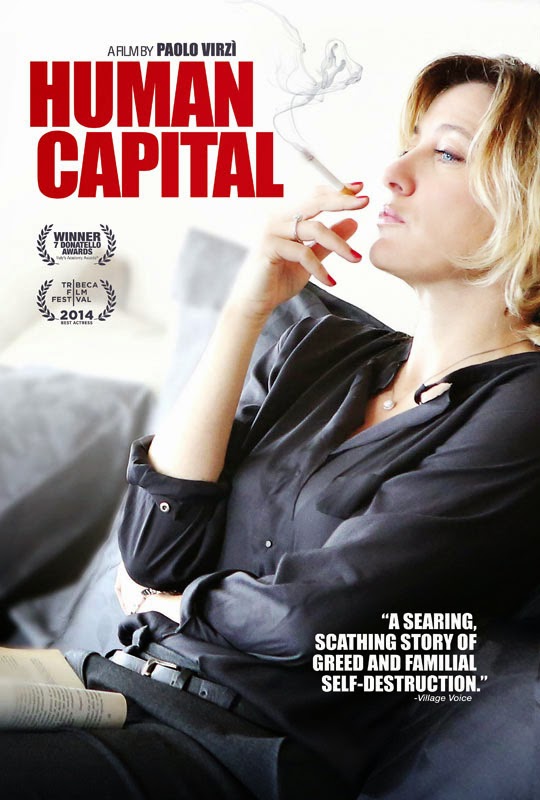 HUMAN CAPITAL begins with a cyclist being struck in a hit and run by an SUV. It then rewinds 6 months to tell the seemingly unconnected story of Dino (Fabrizio Bentivoglio), a middle class shlub who dreams of joining the ranks of Italy's wealthy elite. And he just may have an “in”, since his daughter Serena (Matilde Gioli) is dating Massimiliano (Guglielmo Pinelli), the spoiled son of an investor, Giovanni (Fabrizio Gifuni), and his ex-actress turned bored housewife Carla (Valeria Bruni Tedeschi).

Dino manages to use his daughter's connections (and his usefulness to Giovanni as a tennis partner) to finagle his way into Giovanni's latest investment, but since he doesn't have the cash he has to mortgage his home and business to get it, unbeknownst to his psychiatrist wife Roberta (Valeria Golino), who as it turns out has just discovered she's pregnant. We then see the events that led up to the accident from the beginning of the film at which point the film goes back in time again, switching perspectives first to Carla's, and then to Serena's.

Seeing what each character knows fills in important gaps in the narrative until the mystery of who struck the cyclist is finally revealed. As engrossing as that mystery is on its own, it's the themes beneath the surface narrative that make HUMAN CAPITAL more than just an enjoyable crime tale. What could have been soapy fluff is actually a biting look at money and power that critiques the super rich and those willing to throw ethics out the window to join their ranks, all the while asking just what kind of price tag can be put on a human life. A depressingly small one, as it turns out.

The performances are all first rate, creating characters who are interesting enough to invest in even if none of them seems quite worthy of rooting for. Even the most grounded of the main protagonists, Serena, winds up showing some moral failings of her own. Director Paolo Virzì brings considerable style and flair to the proceedings, utilizing lots of camera movement and making the most of his film's set design, but without getting so showy as to get in the way of the story or its themes. 3 ½ out of 4 stars.
Posted by Bob Ignizio at 4:23 PM