Howard the Duck (February 21st at the Cleveland Cinematheque)

[HOWARD THE DUCK screens Saturday February 21st at 9:20 pm at the Cleveland Cinematheque.] 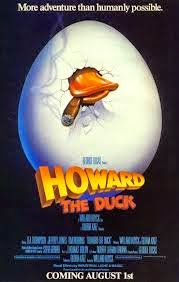 This happens to be the weekend of the inaugrual Cleveland Comic Con, bringing lots of celebrities from the world of film, fantasy and comics to downtown. Oh joy, right? Okay, now for a responsible opposing viewpoint.

Imagine a kind of incredible alternative universe, like Counter-Earth from DC's Infinite Crises, or the What-If universe of Marvel. An alternate universe in which superhero comic books are actually pretty dumb and nerdy. Sort of second-rate magazines that nobody but children and geeks took seriously. And movies made from those selfsame superhero comics are even junkier. Like...really stupid. And grownups' time would be spent wisely doing something else rather than paying attention to them.

Now imagine a movie that somehow happened to hail from that Bizarro Universe. A really crummy, big-budget superhero movie that bombed and nobody liked. Amazing premise, right? Remember, this is comic-book fantasy scenario, so anything can happen.

Oh, and that movie is set in Cleveland.

Welcome to my nightmare, as Alice Cooper said. Welcome to 1986's HOWARD THE DUCK.

H the D, for those of you lucky enough not to remember, was a Marvel "cult" superhero who had his own magazine for just a few years in the 1970s. Howard hails from a remote, alternate Earth-type world where humanoid ducks have evolved like human beings, right down to parallel waterfowl culture (there's a hit movie titled BREEDERS OF THE LOST STORK, har har). In the comics Howard interacted with the likes of Spider-Man, but this is a basic origin tale - with a then feather-curling budget of $50 million - serving the duck cold.

Via a human deep-probing laser device, Howard is accidentally teleported to Cleveland, Ohio (badly played by southern California, including gratuitous punk rock gangs and a hot-tub orgy scene just to rub in how not California this place really is). The wisecracking bird bumblingly tries to fit in with a society of "hairless apes," becoming manager of an all-female rock band and gaining a girlfriend in the form of lead singer Beverly (Lea Thompson). There are so many things wrong with that sentence that I'm dead now (not an original line, but I've been wanting to use it for a very long time).

Possibly the only refreshing thing about HOWARD THE DUCK is that the maverick mad scientist Dr. Jennings (Jeffrey Jones) who brought Howard through the cosmos, for once, doesn't want to dissect or exploit the alien, just send him home. But his laser device has also teleported a sort of space demon-thing that possesses and mutates Jennings into a drooling kind of forerunner to the kind of creature portrayed by Vincent D'Onofrio a decade later in MEN IN BLACK. Howard turns unlikely hero to save Beverly, Cleveland and the world from doom.

I read a conspiracy theory once that George Lucas, of all people, produced HOWARD THE DUCK because director Willard Huyck supported him early in his career and this was repaying the favor. Okay, so someone explain Jar Jar Binks. Sorry, Marvel Fans, HOWARD THE DUCK is just one big rotten egg, with obnoxious characters, tinny 1980s synth-pop music, merciless avian puns, repetitious and thrill-free car-chase scenes and bad-taste gags, a few revolving around the prospect of human-duck lovemaking, something which Beverly and Howard approach but never consummate. Whatever post-modern gag appeal the original character held got left behind on the funny pages by this version,

Despite all the money lavished on the production values (probably more than were spent on renovating the real Cleveland in the 1980s), Howard is clearly a "little person" actor in a near-immobile duck mask and suit. One should appreciate all the more how well Jim Henson's Creature Shop undertook the impossible tasks of bringing to fluid life the equally goofy Teenage Mutant Ninja Turtles a few years later and succeeded quite well. Howard's movie, meanwhile, dropped from sight, and added to the fanboy whispers that any bigscreen adaptation of DC Comics' rival would suffer from the dreaded "Marvel Curse" and wind up equally bad.

For those who care, the comic-book Howard really does live in Cleveland. I know this not because Tyler Durden knows this, but because for bit a local daily newspaper that refused to hire me...The Plain Dealer, yes, I think that's the name. They still around?...had the broad-mindedness to run Marvel's syndicated Howard the Duck daily comic strip in its pages, about ten years before this movie came out. After all, what other strip was going to mention Cleveland, ever?

The comics Howard did indeed possess a certain gonzo appeal and subversive wit, so much so that when the PD canceled the strip later in the 1970s, local TV personality Art Lofredo took to the TV airwaves to read the week's worth of continuing Howard strips to fans, at least for a little while. I was reminded of the legendary interval when NYC Mayor Fiorello LaGuardia read the embargoed Little Orphan Annie comics over the radio for the benefit of fans during a local newspaper strike. Well, wouldn't you be?

Oh, right, you have never heard of Little Orphan Annie, as she was not created by Stan Lee or Jack Kirby. Okay, back to the real world of 2015, in which Daniel Day-Lewis is probably undergoing extensive species-reassignment surgery to portray Howard the Duck in a $500 million remake. (1 1/2 out of 4 stars)