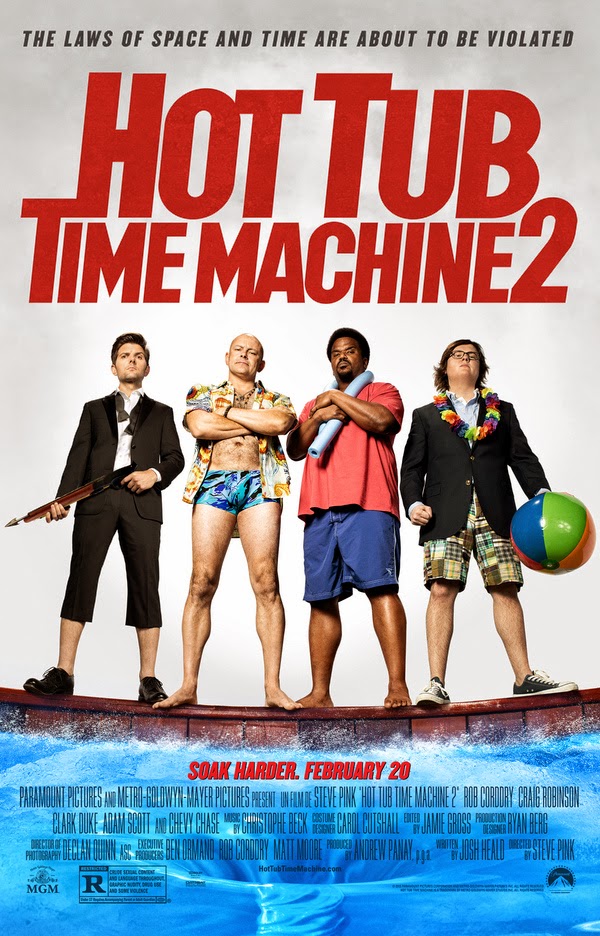 It's not as if the original HOT TUB TIME MACHINE was a great movie, but it was an enjoyable nod to the kind of silly, raunchy, reality-be-damned comedies that were everywhere in the eighties. The story was nothing special, but it was coherent and had a heart. There were a number of laughs, and the cast (chiefly John Cusack, Craig Robinson, Rob Cordry, and Clark Duke) was affable. No one really needed a second go around of the concept, stated in all the detail necessary in the film's title, but given that the first film was more fun than it probably had a right to be, this reviewer was open to the idea. Unfortunately, more than just John Cusack is missing from this sequel, which is more luke warm than hot.

Both Nick (Robinson) and Lou (Cordry) have, thanks to their time travels, managed to change their lives considerably. Nick is major pop star thanks to all the future hits he can record as his own years before they would have been written. Lou started out as a rock star, but then morphed into a tech guru responsible for the internet's most popular search engine, Lougle. Things aren't nearly as good for Lou's son Jacob (Duke), though, who Lou treats as his personal butler.

Then Lou gets shot in the crotch at a party, and before he dies our three protagonists manage to get back to the time machine (now in Lou's mansion) so they can go back and prevent the attack. The time machine has other plans, however, sending them 10 years into the future instead. As Chevy Chase says in his token cameo, the machine doesn't send you where you want to go; it sends you where you need to go.

If you liked the first film, as I did, you'll probably laugh at some of the jokes, although there's about as many misses as hits this time around. The gag writing isn't the main problem, though. It's the fact that those jokes are shoehorned into a completely lazy screenplay that barely holds together. Despite the fact that he is occasionally fading in and out of existence, Lou doesn't take finding his murderer all that seriously. Instead he and the gang run around doing one idiotic thing after another, eventually hooking up with the son of Cusack's character (Adam Scott). The characters then wind up embarking on drug binges, have forced virtual anal sex on a TV game show, and generally all act like assholes.

It's one thing for Cordry's Lou be an asshole and have the other guys deal with it as in the first film, but it gets kind of monotonous when all the characters act that way. Jacob is still moderately sympathetic, but for the most part it's hard to care about what happens to any of these characters. I know I didn't. The only reason I cared about who shot Lou and why is that it would, in theory, signal the movie was coming to the end and I would be free to go. 2 out of 4 stars.