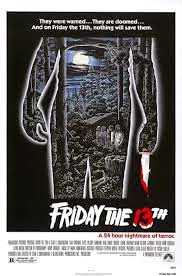 I would like to think that the CWRU Film Society has revived the original FRIDAY THE 13th, from 1980, as a Valentine's Day special. After all, this was the artless potboiler that did more than most in the tidal wave of slasher films, to directly equate having sex with getting pitilessly slaughtered. Works for me.


Or I would like to think that there is a sneakier, more subliminal message directed at campus moviegoers: in this economy, your chances of getting killed by a maniac are better than your chances of getting a job after graduation. Better prepare to slash your budget, he he. Oh, and your University Circle professors thank you for the wasted tuition money that pays their elite salaries. Speaking of horror.

That's I would like to think. But in truth, the title's booking is just a cash-in on the fact that this Friday happens to be the 13th. The CWRU kids could have shown the 1933 British comedy FRIDAY THE THIRTEENTH, or even a 1970s psychothiller obscurity THE ORPHAN...FRIDAY THE 13TH, about a homicidal little boy (an unrecognizable mangling of a Saki short story). But nooooo, as Jim Belushi used to say in this film's era. The CWRU gang instead went with the iconic knife-kill flick that generated, what, 12 or 13 sequels by now? And a remake? And a terrible videogame.

I've quite lost track. I wasn't exactly in the first-night crowd when FRIDAY THE 13th premiered courtesy Paramount Pictures in May, 1980. My high-school memories of NE Ohio of that period are pretty much that if you left your house you ran into a wall of marijuana smoke and/or news that another big Cleveland corporation had closed down or left the region. So I mostly stayed indoors, had no dates, read the Great Books, taught myself oil painting, and did advance-placement homework, to nail down my employability (talk about a waste). But even I was aware that all the youth were flocking to this nondescript, grotty little killfest from the same studio that owned Indiana Jones.


I mean, let's face it, unless you award points for creative grossout-makeup by cult-hero special-effects artist Tom Savini, FRIDAY THE 13TH  has few redeeming qualities, any way you slice it, even in the metaphor-stretched world of horror flicks. You know what I mean, the climate where intellectuals argue that flesh-eating zombies are really symbols for mindless consumerist Republicans or whatever. Nobody defends FRIDAY THE 13TH that way.

Yet this movie series is nown to practically everyone. Hockey-masked "Jason" costumes are popular, and sequels and reboots and tributes (some fun ones on YouTube) continue to be produced.

The photoplay was a clear imitation of John Carpenter's more elegantly scary, original HALLOWEEN. But unlike similar carbon copies (PROM NIGHT, TERROR TRAIN, etc.), FRIDAY THE 13TH had the backing of a wealthy studio who could put plenty of celluloid prints into many more auditoriums at the start of summer-vacation season, for horror-fixated schoolkids on break. And, at the natural prompting of the title, Paramount had the machinery and the moxie to crank out cheapo sequel after sequel, cleverly timed for release whenever a Friday the 13th date appeared more or less annually on the calendar.

Too bad the first movie is, well, too bad. A 1958 prologue (it looks like 1978) shows two young summer-camp counselors about to have sex when a mystery assailant - apparently someone they know - slashes them to death. The New Jersey camp, now known to locals as "Camp Blood," is closed for 20 years as a result, but is now re-opening, on a dark-and-stormy Friday the 13th. Another group of young, largely sex-minded counselors are gathering for orientation. Sure enough, an unseen attacker again begins knifing them to death, one by one. Since these youths are prone to playing practical jokes on each other, or sneaking off for sex and drugs, they take little note of their cohorts' strange absences until nearly all of them are dead.

As was cleverly pointed out by the killer in SCREAM, the culprit here is NOT Jason Vorhees, who would hack through followup features (it wasn't until the third one in the series that Jason even put on the infamous hockey mask). But FRIDAY THE 13TH hardly works as a whodunit because the Camp Blood murderer is nobody we've met or even known about before. That just leaves the movie as one killing after another, with abundant, er, dead space in between, with the doomed camp counselors going swimming, playing `strip Monopoly' or chatting unremarkably.

It may amuse trivia fans that one of the cast of unknowns, Kevin Bacon went on to a respectable acting career. Another amazing movie fun fact: director Sean Cunningham's previous films to this had been a couple of wannabe family-friendly features, such as MANNY'S ORPHANS, a BAD NEW BEARS clone, done for the same studio. Those failed at the box office - as Cunningham was apt to point out to his many detractors (including Gene Siskel and Roger Ebert), when FRIDAY THE 13TH made loads of money with young viewers. He tried to go the Disney route, he really did, said the artist du cinema, but look what happened. As the old saying goes, the kid's got a point.

While HALLOWEEN set the pace, it is especially evident in FRIDAY THE 13TH that the slasher preys on the most sexually active victims first, leaving the most chaste and girl-next-door virtuous character, Alice (Adrienne King) the sole survivor (though she failed to withstand FRIDAY THE 13TH - PART II). And, unlike the mindless, unmotivated mayhem of Michael Myers in HALLOWEEN, the plot here actually furnishes the slayer with a reason for a homicidal hatred of hormonal teens. It's remarkable that much as the slasher genre has pushed back boundaries of film censorship and raised the ire of Judeo-Christians (boo! Hiss!), the basic message is a harsh conservatism that even a Taliban fundamentalist would endorse, that teen sex is punishable by instant death.

As I say, works for me. Especially around Valentine's Day. I've had some bad times.

Perhaps the best way to enjoy FRIDAY THE 13TH is to double it up with a home viewing of Anchor Bay's 2007 documentary HIS NAME WAS JASON: 30 YEARS OF FRIDAY THE 13TH, a good-natured retrospective of the series and celebration of its staying power as pop-culture guilty pleasure. (1 1/2 out of 4 stars)

Posted by Charles Cassady Jr. at 9:09 AM