Free the Nipple (February 5th and 6th at the Cleveland Cinematheque)

[FREE THE NIPPLE screens Thursday February 5th at 8:45 pm and Friday February 6th at 9:25 pm at the Cleveland Cinematheque.] 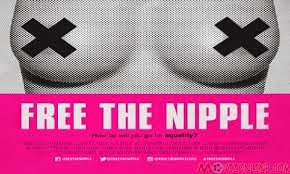 I know that I disappointed you all last week when I failed to pass the mandatory drugs test administered to all local movie critics, leading to the latest of a series of suspensions from the Cleveland Movie Blog and my "voluntarily" checking into rehab.

This follows my other well publicized episodes with drugs and alcohol and poor life choices...Like the time I showed up hammered at the preview of AMERICAN SNIPER at Tower City and kept laughing at the dignitary in the front row and how he spoke. "Who is that ugly #@(*!ing troll in the suit and why does he talk like the Swedish Chef?" I remember saying, between bourbons. Little did I know it was the president of IKEA, deciding whether to open an outlet store here.

There were other incidents, of course. My drunken attack on Pam Zoslov in a hotel elevator, caught on security camera and aired on TMZ. My drunken, racist e-mails back and forth with Sony executives. And, of course, my drugged-up molestations of various actresses and models. Like many white evildoers, I disguised myself with crude face paint and exaggerated mannerisms, passing myself off as a stereotypical black man. It was only pure luck that every one of my 30-odd victims over the years mistook me for Bill Cosby.

Yes, all that I did while overindulging myself in whisky, marijuana, heroin, and cough syrup. Nobody forced me. It was my choice. And I must face the fact that only one person is responsible for my actions. Only one person made me stay up late partying to miss press screenings the next day. Only one person caused me to be chronically late to movie-critic practice. Only one person is guilty of the reckless behavior that has so damaged my career.


It's your fault! You Clevelanders drove me to it. You men who hired just about everyone except me for your meager job openings, even Josh Gordon. You ice-hearted women who ignored me, bestowing your manipulative charms and companionship on the likes of Johnny Manziel.

No wonder I have to remain perpetually stoned, just to function. I do hope this rehab center that the Cleveland Movie Blog is sending me to has a well-stocked bar.

Before I am 'voluntarily' checked in, though, I owe a movie review. What's this junk called this week? Oh, here it is, FREE THE NIPPLE. Man, with a title and premise like this pop-political riot-grrl agit-prop, you internet kids will instantly forget that rather nice piece of satire I wrote above.

Most of the online writeups for this would-be third-wave (possibly fourth-wave) feminist manifesto are pretty blistering and negative. Even the NYC women critics dislike it (shoutout to Maitland McDonough, who was my editor during a happier time in my life). Normally I'm as enthusiastic about feminism as I would be finishing the 50 Shades of Grey trilogy (translation: not very). But for what it is - and maybe, unintentionally, what it does - I found the picture watchable.

The script claims to be based on actual events - an overused come-on I've found cheesy ever since the first TEXAS CHAINSAW MASSACRE movie used it. But I am given to understand that the based-on-actual-events activists are in this thing (plus special guest star Janeane Garofalo), pretty much playing themselves. Which either gives FREE THE NIPPLE docu-drama verisimilitude, or proves that everyone involved is a wannabe showbiz-celebrity whore. Given that the fulcrum of the movie is women going topless, it's an even bet.

Winsome young writer-director Lina Esco plays a winsome young New York City journalist with the curious name of With (maybe I just misheard it), who witnesses a strange, streaker-type display in the streets by a bunch of bare-breasted ladies wearing superhero capes. With learns from the leader of the protest, Liv (Lola Kirke) that they represent a feminist group, protesting that Manhattan females are still arrested by cops for baring their chests in public, even though most other liberal-progressive nations (well, France) no longer bat an eye about toplessness. And even New York state law has made it okay since 1992 (I must have missed that particular news story; was probably looking for a job that ultimately got handed to a topless girl).

With tries to interest her newspaper editor in an article about this "Free the Nipple" campaign. The patrician guy is so outraged he fires her on the spot. Okay, the movie mostly lost me right there. Sorry, victim-feminists, but in real life here, in the modern journalism-scape, a reporter like With who wants to talk bare breasts would earn an immediate promotion, a pay raise and corner office. Oh, and she'd get a new photo made for her column header and online blog. Probably one with her dancing on a pole.

Anyway, the humiliation radicalizes With. She appoints herself Liv's chief propaganda minister, or whatever. Despite having no money (everyone seems to live in luxury squats), they set up a headquarters and brainstorm ways to get the message of Free the Nipple out.

Here is where I feel the dubious-sounding but upbeat flick does earn redeeming social value, in showing, step by step, how a marginal movement in modern times gains a high profile to put forward its agenda.

Forget (if you can) the silly drama about legality of nude boobies - and, with the offscreen controversy over police violence, mainly in fatal incidents against blacks, the film's emphasis on baring it all in front of Johnny Law does come off as looney ultraliberalism at its most out of touch and irrelevant, short of whatever's going down on any given American college campus. But FREE THE NIPPLE does demonstrate how to start a low-budget viral sensation, via YouTube videos, crowdsourcing, networking, media events, and inviting on board high-profile sympathetic VIPs (here photographer Spencer Tunick and a graffiti artist I assume to be inspired by Banksy), until it becomes a real force and bandwagon for young trendoids.

Of course, part of the push, I assume, includes making a movie called FREE THE NIPPLE and getting sites like this one to pay mind to it. Speaking of troublemakers, in real life, (given that the film is sort of a meta-real life) I understand Miley Cyrus has become a big supporter of FREE THE NIPPLE, and she contributes a closing tune. Is Miss Cyrus still doing that nice Hannah Montana show on the Disney Channel? I can't afford cable so don't know.

For what it's worth, there's less actual nudity in FREE THE NIPPLE than there was in SHOWGIRLS; even with one fleeting hint of quasi-lesbian tension that's the only reference to these characters' intimate lives, it's not what I would call erotica. Unless you're also a single-issue activist looking for a blueprint to how, in this new-media climate, shriek at maximum volume about your insane cause. Be it promoting Islamofascism, Occupying Wall Street or getting government aid for the Browns. Then the film is pretty hot. (2 1/4 out of 4 stars)