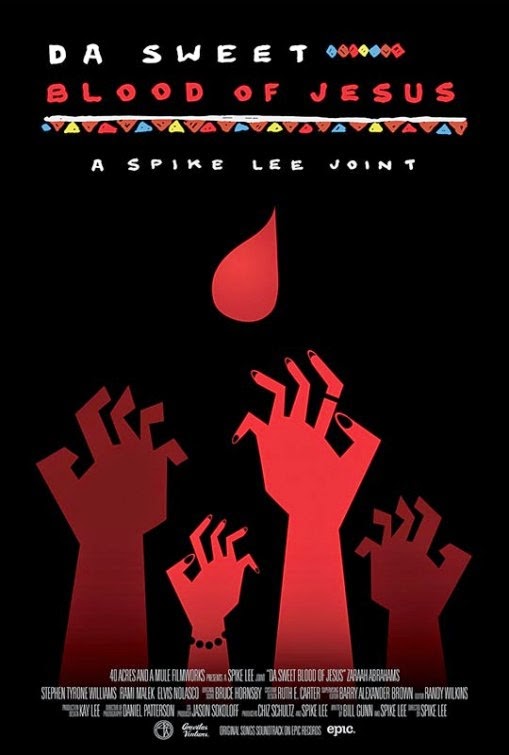 The 1973 cult vampire/art film GANJA & HESS is exactly the kind of movie that should be remade. Writer/director Bill Gunn's strange hybrid of horror, blacksploitation, and art film had a lot of interesting ideas and potential, but it's the kind of film that even admirers tend to describe as “flawed”. Evidently one of those admirers is Spike Lee, who has remade GANJA & HESS under the title DA SWEET BLOOD OF JESUS. The results are... well, about the same.

Lee sticks close to Gunn's original story in which anthropology professor Dr. Hess Green (Stephen Tyrone Williams) is stabbed with an ancient tribal dagger by his unbalanced assistant, Lafayette Hightower (Elvis Nolasco), who then kills himself. The dagger doesn't kill Green, but instead makes him an immortal with a thirst for blood. Beyond those most basic attributes, however, there is little resemblance between Dr. Green's affliction and traditional movie vampirism, with Hess notably walking around during the daytime without suffering any ill effects.

Not long after Dr. Green's transformation, Lafayette's ex-wife Ganja (Zaraah Abrahams) comes looking for him. Ganja and Dr. Green hit it off immediately, and even when she discovers Lafayette's body in the deep freeze she doesn't stay mad long. Eventually the two marry and Green turns Ganja into a bloodsucker (or “blood addict” as the movie refers to them) as well. Yet despite his immortality, a swanky home on Martha's vineyard, expensive cars, and sexy immortal wife, Dr. Green begins to find his undead existence less than satisfying, even as Ganja begins to embrace her new state.

This is the kind of movie that has a lot of ideas, but can't manage to express them coherently. It's clear that DA SWEET BLOOD OF JESUS wants to say something about the nature of addiction and religion within the context of black America, but the film is so vague that we're never quite sure what that is. And the film isn't just thematically vague; fairly major plot points, like what happens to Hess' victims, tend to get glossed over. Eventually you'll figure out that everyone Hess kills comes back as a bloodsucker, too, but it's kind of distracting wondering why victim number one, a prostitute, just gets up in the morning after having her throat slashed, pissed but seemingly none the worse for wear.

There's also a lot of padding, which makes watching the two hour film more than a bit of a slog. To compound matters, Lee seems is less confident in his film's arthouse leanings than Gunn was, amping up the sex and violence. I don't necessarily have a problem with that, and had Lee gone for more of a straight up horror/exploitation approach, while still exploring its themes in a more subtextual manner, it might have worked. This just feels like a movie sitting on the fence, though, unsure of exactly what audience it's aiming for. But perhaps the film's most egregious shortcoming is the lead performance by Stephen Tyrone Williams, whose bland delivery and utter lack of presence make his Hess seem as bored as we are watching the film.

That said, there are a few moments here and there that make one want to stick with DA SWEET BLOOD in the vain hope that Lee will somehow pull it together in the end. One particularly indelible scene is when Hess is leaving the apartment of one of his victims, a single mom, and he cheerfully baby talks to the infant while its mother lies bleeding on a bed nearby. Even after I realized that Hess' victims come back as blood addicts themselves, Lee managed to do something with this set-up that actually added to the horror. In the end, though, moments like this are too few, and the rest of the film too muddled and meandering to ever gel into a satisfying experience. 2 ½ out of 4 stars.
Posted by Bob Ignizio at 12:00 AM