Concerning Violence (February 12th and 13th at the Cleveland Cinematheque) 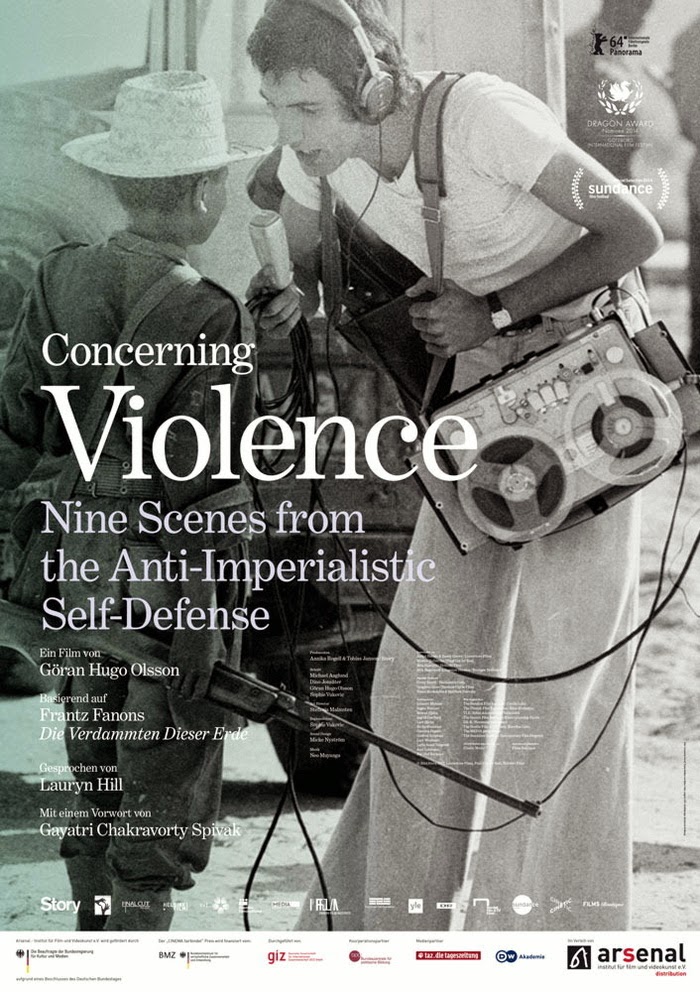 Now that AMERICAN SNIPER is a historic hit, associated in the punditry with patriotism and Right icon Clint Eastwood, how can the red-diapered Left come up with a suitable response? Putting aside the fact that nine out of ten motion pictures out there are, somehow along the line, the product of the red-diapered Left anyhow?

University Circle Marxists can rejoice, however, that their rejoinder is here in the lumpy form of CONCERNING VIOLENCE, a 2014 Scandinavian-American docu-compilation, from the creators of the earlier THE BLACK POWER MIXTAPE. I liked that one, an eye-opening gaze back at black-militancy and liberation movements in the USA in the 1960s and 70s via interview footage captured by Swedish TV journalists, seen by almost nobody here previously. Evidently believing that the Swedes were not compromised or allied with Washington DC or the FBI in the manner of America's lily-white media, the likes of Bobby Seale and Stokely Carmichael spoke with the Nordic reporters with unguarded ease and frankness, in the process becoming real people rather than sloganeers and public enemies.

CONCERNING VIOLENCE is of a piece with THE BLACK POWER MIXTAPE (both films, for some reason, divide themselves into nine chapters, plus an introduction), only here the subject is a place about which - thank you, American school system and Texas Board of Education - most African-Americans probably don't know very much: Africa.

Against Lauryn Hill's recitation of the angry prose of Afro-Caribbean writer Frantz Fanon's The Wretched of the Earth (1961), cinema here revives the era when natives began casting off the chains of western imperialism and bloodsucking international corporations and seeking self-determination.

These documentaries are not your standard explanatory presentation; no background, little concrete sense of who is doing what to whom, and especially no regard paid to the notion (still no doubt cherished by conservatives and Wall Street) that Africa's wars and revolutions amongst the poorest nations on the planet were necessary in the bigger fight of the United States and NATO (AKA, the colonial powers) vs. the USSR and its vassals. Instead we're submerged right into the violence - well, not at first.

First there's a lengthy, droning intro by an American academic (who no doubt is tenured and makes more money now than you or I) about the theme of CONCERNING VIOLENCE, I think. When not nodding off, I was reminded of the infamous "square up" in vintage sleaze-exploitation pics of yesteryear. That was the term for the phony lab-coated guy at the desk with the world map behind him, who told you of the vital importance of the sex-and-violence images you are about to see. Who would have guessed you'd ever see a square-up again, not in a Times Square grindhouse but in such an upscale milieu?

Then the footage begins, and a roll-call of names associated with strife and misery: Mozambique, the Belgian Congo, Tanzania, Liberia. Right away there is a gruesome, straight-outta-a-1960s "mondo" movie, dare-you-to-watch sequence of cattle being machine-gunned to death by helicopter-born black soldiers. I can't tell you the context or good guys or bad guys or what. But it gave me a bad feeling that the poor, blood-foaming cattle were white.

On-the-ground interviews with Anglo citizens in Rhodesia (now Zimbabwe), meanwhile, are shocking on another level, as one white guy is aghast at the notion that blacks might want to drive (or worse, own) cars. Evoking racist epithets I had never heard before ("affies," "terrs"), he foresees being able to kill at least several in battle before they ultimately take him down.

In Liberia there's a strike by native workers of a Swedish-American
mining company, one in which even the (black) president of that nation, William Tubman, finds the protesters uncooperative troublemakers (I'm afraid I couldn't quite see the argument here, even with the presence of international capitalism). In revolts against the Portugese masters of Mozambique, we see both stricken comrades of a slain white soldiers and the haunting imagery of a black woman missing an arm nursing her baby missing a leg.

No, Lauryn Hill does not sing her cover of "Killing Me Softly." Aside from Michael Moore or the Yes Men the Left doesn't have that sense of humor. But the words of Fanon she reads make appallingly clear the mindset of the colonized, and why the anger of disenfranchised, exploited blacks of Africa explodes in carnage that they believe to be their lone option. One zinger: "Europe is literally the creation of the Third World. The wealth that smothers her is that which is stolen from the underdeveloped peoples."

A late, 1987 account from Burkina Faso, informs us of a local leader, Thomas Sankara, who puts into brilliant oratory why feelgood charity efforts (the celebrity circle-jerks Live Aid and USA for Africa are not mentioned but guilty as hell) are doing his people harm instead of helping. According to this, Sankara was straightaway killed by a US-France coalition. Ah yes, prime scumbaggery of the Reagan years. In the 2016 elections, millions of dollars will be spent to bring that sort of thing back into political vogue. Obama's certainly done his part.

Much as CONCERNING VIOLENCE has a lot to teach us, I doubt its scrapbook aesthete gets the message across the way it needs to be conveyed, especially to an America that doesn't know the Congo from Kong (either Hong or King). And I could have done without the square up.

For those of you who feel bad about the slaughtered cattle, know that this sort of thing happens in stockyards and factory farms every moment. I advise a gradual, informed transition to vegetarianism. It is easier than you might think, trust me. Easier than fixing the gory mess that the colonial powers and multinationals made of Africa.
(2 3/4 out of 4 stars)
Posted by Charles Cassady Jr. at 8:10 AM