[THE KINGDOM OF DREAMS AND MADNESS opens in Akron on Friday January 2nd at the Nightlight Cinema.] 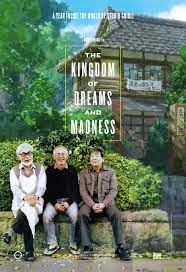 I am rather surprised there aren't more documentary films about Japanese animation. Come to think of it, the only one I could really name, never seen but known only to me by reputation, is a shadowy DIY effort called THE OTAKU MOVIE, reputed to be more of a mockumentary/fan flick than anything else. While so much in the world of popular culture seems to be docu'ed to death (anyone seen Keith David’s Creature from the Black Lagoon documentary? How is it?), the breadth and richness of Japanese anime and their close relation, manga comics, are still fairly unexplored by documentarians. Is that possibly because the idea of these folks sitting at their workstations, churning out tons of their art, just isn't very compelling?

So, taking the lead in the genre by default is Mami Sunada's Zen-like and elusive THE KINGDOM OF DREAMS AND MADNESS. It visits the sanctum of one of the very best-known Japanimation studios - one sometimes compared to classic Disney for its stature and quality - the legendary Studio Ghibli, and its guiding luminary, Hayao Miyazaki. Despite a title that sounds like a Werner Herzog nonfiction journey-into-darkness-or-some-remote-hellhole-or-both, KINGDOM OF DREAMS AND MADNESS is actually a very mild pic (but long for nonfiction, nearly two hours), with Sunada narrating briefly that she's tickled to be allowed into the cloistered work environment of Miyazaki, responsible for some of the most popular anime of the past 50 years, including MY NEIGHBOR TOTORO, CASTLE OF CAGLIOSTRO, LAPUTA - CASTLE IN THE SKY, PONYO and other worldwide faves

Those expecting a glossy, PR-heavy, Leonard Maltin-quoting retrospective in the self-congratulatory manner of 2009's THE PIXAR STORY will be surprised at the low-key approach that doesn't even show clips from Studio Ghibli masterworks until a brief montage near the end.

Instead the daily, somewhat ascetic, even mundane routine at Studio Ghibli, in Koganei, part of greater , is revealed. In a quiet, rather villa-like office environment (with a bobtail-cat mascot),  works from to without fail or overtime. On his Sundays off, he helps clean a local river – emblematic of his lifelong environmental themes and nature elements in his work. The nuclear disaster haunts him, he says, as a wake-up to life in the 21st century. Now in his 70s, he says he would rather be a 20th century man (reminiscent of Humphrey Bogart, born at the end of the 1800s, reportedly considered himself always a 19th-century sort of guy, not a part of the 20th…Discuss).

says original Ghibli movies (presumably this excuses ones like KIKI’S DELIVERY SERVICE or HOWL’S MOVING CASTLE, based on literature) are not developed/scripted/focus-group surveyed, unlike . Scenarios grow organically from storyboards he illustrates, and often a project is commenced without any firm idea of how the plot will end. Sometimes the animators can’t even make head or tail out of ’s storylines (SPIRITED AWAY cited particularly). As opens, we’re told the studio has nothing on its slate for the next year except some TOTORO product-licensing deals. But that changes with two titles. One is ’s own THE WIND RISES, a historical epic based on the life of a young Japanese pacifist with a passion for aviation technology who wound up designing the Zero warplane (if that’s what Japanese pacifists are like, I’d hate to meet the hostiles). The other, far less detailed in terms of plot or concept, is THE TALE OF THE PRINCESS KAGUYA, created by a certain Isao Takahata - under whom did his animation apprenticeship five decades ago, working on a well-remembered Nippon cartoon TV series based on Heidi, of all things.

A certain rivalry develops between the two works-in-progress. We never meet Takahata, and speaks of his former master in wildly contradictory terms, sometimes as a procrastinator who accomplishes nothing on time or under budget, other times with glowing praise. Late in the film we learn that plans to retire with THE WIND RISES, so maybe that gets his emotions a little wound up. Hard to say.

As far as any other concrete biographical details, mentions a marriage, making it out like a chore he reluctantly undertook. If this world-class animator sounds a bit like a curmudgeon, well that is how he comes across. But ’s criticism doesn’t even spare himself. He is embarrassed by PORCO ROSSO, a war drama about a fighter-pilot pig that the fandom quite likes.

And he wonders, in the big picture of life, whether movies are really that important and worth the trouble - or just like so many things, “rubbish.” Making Hayao Miyazaki my pick to host both the Oscars and the Golden Globes. Tina Fay and Neil Patrick Harris can take a hike.

I can imagine some anime fans being impatient with . Where is the spectacle? The glamour? The red-carpet premieres? The topless mistress-sunbathers at ? We only see a small bit of the actor-voiceover recordings for THE WIND RISES. No kidding, the people in this office could just be making widgets half the time, under a cranky eccentric-inventor type (with a cat mascot), and the movie would be similar.

Then again, Walt Disney never dropped his guard and let people poke around informally in his inner the way this movie does. The film shows how Ghibli films arise from careful collaborations in an atmosphere that is almost like family, rather than studio-sweatshop with Variety-reading, TMZ-watching showbiz sharks jockeying for power and promotions. Just don’t expect an encyclopedic appreciation of and his many worlds. (2 ¾ out of 4 stars)