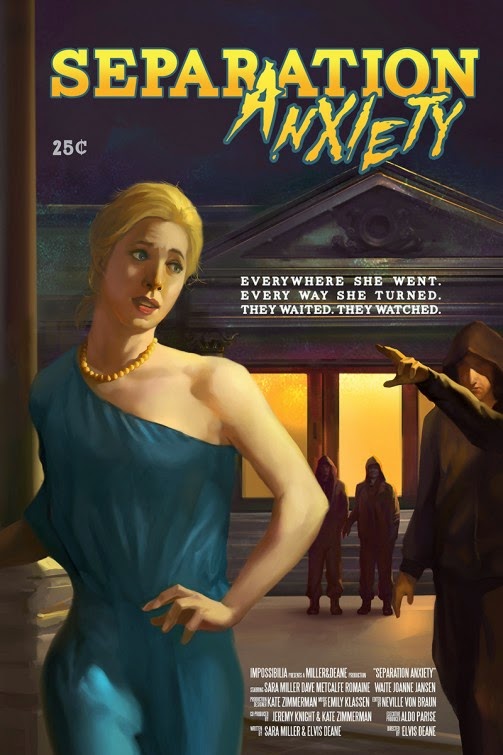 If I were an indie Canadian filmmaker (or any young filmmaker on a tight budget) in need of a professional musical score for a project, I would hire a composer named Emily Klassen.  The creative team responsible for SEPARATION ANXIETY has done just that, and in doing so has made a film that falls far short of its sonic excellence.  Despite this insipid picture being her first feature (in addition to 7 shorts in 2014), Klassen has been recognized by receiving an award in the Musical Theme category at the SOCAN Foundation Awards for Young Audio-visual Composers.  Indeed an impressive start.  The animated stick figures and text in the slick opening title sequence (see Spielberg’s CATCH ME IF YOU CAN) sync up cleverly and dance with the menacing Hitchcockian accompaniment.  Throughout the film, a mysterious musical concoction of sinister piano, thunderous percussive barrages and a nefarious noodling of strings set an ominous tone for this self-proclaimed “throwback to the thrillers of the 1950s.”

A throwback thriller this is not. A throwaway? Perhaps. Jeane and Arthur have been a couple for 3 years, living together in an apartment near raucous street construction somewhere in Toronto.  The constant and deafening jack-hammering makes it impossible for Psychology student Arthur to concentrate on writing his dissertation; a thesis he contends will allow him to attain his dream job and land the couple in greener pastures.  Arthur leaves to stay at his Uncle’s (conveniently vacant) place to write in peace.  Jeane is alone for the first time in years, and immediately finds herself being constantly followed by different taciturn young stalkers in dark hooded sweatshirts.  She walks to work- she’s followed.  She goes to the store- she’s pursued.  She confronts a stalker in an alley and he runs away.  She comes home to find her apartment door ajar, collapses and cries for an awkward 80 seconds before phoning police.

For a time she is unable to contact Arthur.  Discoveries are made at his university and at his crash pad, and what’s revealed to her in the end is neither shocking nor interesting, but quite predictable and lame; much like the dialogue.

Arthur: “It was only two weeks ago we were standing here drinking coffee and laughing…feels like so long ago.”
Jeane: “Time is the greatest distance between two places.”
Arthur: “Where did it all go wrong?”
TOMMYROT!

I have two questions. Question 1: Why put a non-smoker in the role of a smoker when a smoking character is completely unnecessary?  As an ex-smoker, I despise watching adult actors (who clearly don’t smoke) make feeble attempts to look normal, puffing on a cigarette like some pathetic pre-teen sad sack.  Watch TRUE DETECTIVE.  That is how you smoke.  Question 2:  Where is the shower scene?  You have a shapely female lead in a stalker movie…it begs for a “coming out of the shower, startled by intruder” scenario.

Not much can be expected of a movie made by a first-time writer/director team who interrupt the closing credits of their debut with a vile display of pandering for donations (they accept bitcoin).  Pair a stodgy script and clunky, inexperienced direction with a cast of spiritless and wooden “actors” and you get a movie that after viewing you may find yourself proclaiming, “I could make a better movie than that.”  Many filmmakers, good or bad, have certainly spoken those words and were inspired by a film they considered to be rubbish.  SEPARATION ANXIETY is largely forgettable.  Great soundtrack though. We shall be watching the career of Emily Klassen with great interest.  1 out of 4 stars.

You can check the film out for yourself here.