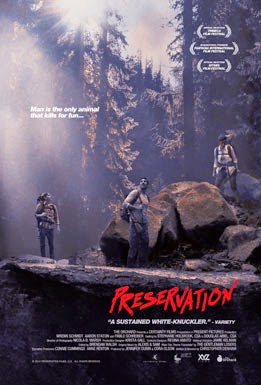 It's usually nice when a thriller or horror film takes some time to actually let us get to know its characters before it starts killing them off. After thirty minutes spent getting to know brothers Sean and Mike Neary, however, I was primed and ready to root for whatever menace the film had in store for them.

Sean (Pablo Schreiber) is a recently discharged soldier who shows little empathy for man or beast. Ditto for his businessman brother Mike (Aaron Staton). Inexplicably, Mike is married to vegan med student Wit (Wrenn Schmidt) who, despite her aversion to eating meat, comes with the brothers as they embark on a hunting trip at a closed nature preserve. As it turns out, Wit is pregnant, and while a weekend of male bonding probably isn't the best time to break the news to Mike, the two see each other so rarely anymore it may be her only chance. Sean also brings along his loyal dog Nix.

After a relatively uneventful first day hiking into the woods and setting up camp, our protagonists hit the sack. When they awake in the morning, their tents and equipment are gone, Nix is nowhere to be found, and everyone has “X”s written on their foreheads. Mike is certain that his brother has snapped due to PTSD, but it isn't long before he and the audience find out that a band of masked psychos have decided to make the hunters the hunted. I don't want to get into spoiler territory so I won't reveal who the killers turn out to be, or what the film seems to suggest as their motivation. All I'll say is that it's as ridiculous as everything else here.

A low budget mash-up of DELIVERANCE and THE STRANGERS, PRESERVATION offers absolutely nothing original or noteworthy. It's the second film directed by busy character actor Christopher Denham, and while he clearly has the technical basics down and works well enough with his actors, he fails to build the necessary suspense to keep us invested. It doesn't help that his style is utterly bland. Even on a lowest common denominator level, the film doesn't deliver the cheap thrills of sex and violence that low budget genre fare can usually be counted on for. It wants to be classier than that, but it's too derivative and cheesy to work on that level.

The cast may not be household names, but everyone here is a good actor. Its nice to see Staton (Ken Cosgvoe on Mad Men) and Schreiber (“Pornstache” on Orange is the New Black) take on more substantive roles. The star of the film, though, turns out to be Schmidt (recurring roles on Boardwalk Empire and The Americans among many other TV and film credits). If the film works at all, it is due to their efforts to sell the wooden dialogue and frequently unbelievable situations to the audience. If they're aware of how bad this script is, and I have to imagine they are, they never let on. 2 out of 4 stars.
Posted by Bob Ignizio at 12:00 AM