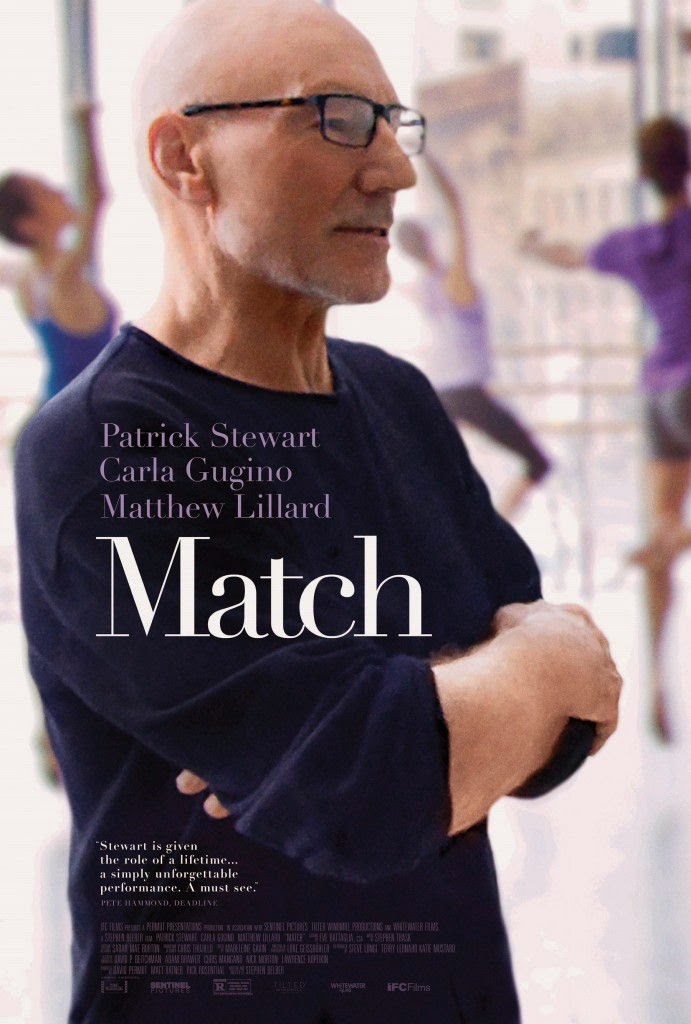 “Arms loose – we're not making pizza!” barks Tobias Powell at his lithe, leotard-clad students at Juillard, where he is a loved and respected dance professor. Tobi, as he is called, is a retired star dancer who performed with, in his exacting pronunciation, “Ballet Nacional de Ca-raa-cass.” He's cheerful and slightly epicene. He is also a hermit, shunning social invitations to sit alone in his spacious Inwood apartment knitting sweaters and hoarding his fingernail parings in a jar.

Tobi is the centerpiece of Stephen Belber's MATCH, which began life in 2004 as a play and has now been adapted by the playwright for the screen. Frank Langella played Tobi on Broadway; Patrick Stewart (yes, the erstwhile Captain Picard) is the lead in the film.

Into Tobi's quiet, orderly life march Lisa and Mike, a young Seattle couple who have asked to interview him for Lisa's graduate dissertation on the history of dance. Armed with a miniature tape recorder, Lisa (Carla Gugino) and Mike (Matthew Lillard) avail themselves of Tobi's blithe hospitality – Merlot, “party mix” and Danish hashish – and then begin to ask him increasingly personal questions. As Tobi regales them with wild tales of his terpsichorean, Dionysian days, the couple seem peculiarly interested in the specifics of Tobi's sex life with fellow dancers in the '60s. Tobi, who is bisexual, tells them there was “blatant, rampant, mean-spirited fucking” in dance companies in that free-spirited era.

Things take a sinister turn. Mike, a cop, erupts in a homophobic rage against Tobi. Clearly the couple have not come to New York for academic research. Their real agenda is the crux of this tense, stagy drama, which takes place predominantly in Tobi's apartment. Mike browbeats Tobi, demanding some kind of accounting. Tobi is forced to look at the choices he made in his earlier life. “I love my life,” he tells Lisa, whom he has befriended despite her complicity in her husband's scheme. “I regret my life. The lines blur, and it's all my life."

Belber based the play on Alphonse Poulin, his wife's dance teacher in Switzerland, a character he thought “colorful and funny and quirky and passionate,” and who had led “such an incredible life.” Belber's "most unforgettable character," as the old Reader's Digest used to put it, might have been the basis of a good play, had not the playwright created a ridiculous story around him.

The play aspires to be like Edward Albee's Who's Afraid of Virginia Woolf?, a one-set drama in which a small cast is drawn into a dark odyssey of vituperation, revelation and transformation. Alas, it's more “Albeit” than “Albee,” an ill-conceived story, albeit one centered on a strong performance. Having established a regrettable secret in Tobi's past that links him to Mike, the play dances merrily away from that idea, leaving the audience feeling tricked, or at least confused. There are many improbabilities, though the film is still quite watchable, even at its most absurd (Tobi explaining his big jar of fingernail clippings, or waxing rhapsodic about the pleasures of cunnilingus).

Stewart's twinkling, sympathetic performance, which I gather is less comic and more emotional than Langella's, is the film's main attraction. Lillard is a mite too loathsome even for the volatile Mike, and Gugino is just serviceable in an unrewarding part. They are merely supports for what is basically an acting showcase for one. 2 3/4 out of 4 stars.