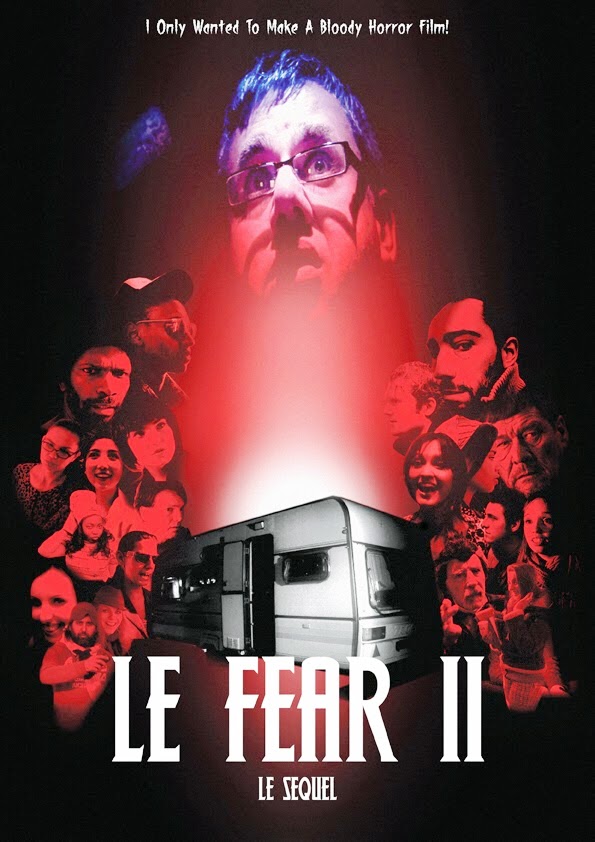 Jason Croot has acted in, produced, written, and directed a good number of low budget films, most of which I have never heard of (I did see and enjoy DONKEY PUNCH, which he had a role in). That experience pays off in his latest film, LE FEAR 2: LE SEQUEL. The film is a comedy/mockumentary set in the world of low budget filmmaking. Of course certain things are exaggerated for comic effect, and the film-within-a-film here has a whole other level of problems attached to it thanks to the involvement of a shady foreign investor. But more or less, this is a fair approximation of by-the-seat-of-your-pants filmmaking.

The humor is alternately dry and absurd, with a tone not unlike the original British version of The Office. Shot with handheld cameras for that documentary feel and with no complicated set pieces, it's pretty much up to the cast to carry the film on their shoulders. The film's anchor is star Kyri Saphiris who plays hack director Carlos Ravalos as a classic sad sack whose deadpan delivery plays well against the more absurd characters and situations around him. The rest of the cast provides mostly able support, although the portrayal of the Nigerian crew members goes a bit more over the top than it probably should in a film aiming for some sense of realism.

The plot is that Carlos makes a bad deal with a Nigerian producer to make a sequel to his previous shoddy horror film. From the beginning, things go spectacularly wrong. Instead of a full sound stage, the producer provides Carlos with an RV to shoot his entire film in. In true low budget filmmaking fashion, Carlos does his best to work with what he has, but it doesn't help that most of his cast and crew are inept and/or unmotivated, or that Carlos himself isn't much good at rallying his troops.

Perhaps the best compliment I can pay the film is that, for its budgetary level, it's polished and professional enough that I don't feel I need to cut it any slack. It's technically well made and acted, and delivers a number of laughs. My guess is that those with some firsthand experience of this world will get the most out of it, but its not as if the jokes are so inside as to go over the heads of the average viewer. There are a few more dead spots than one might like, perhaps a result of much of the film being improvised, but overall LE FEAR 2 proves reasonably entertaining, if not exactly a must-see. 2 ½ out of 4 stars.

You can find more info on the film on its facebook page.
Posted by Bob Ignizio at 12:00 AM