Happy Valley (January 15th and 16th at the Cleveland Cinematheque) 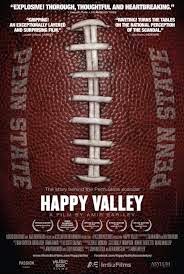 About this time of year (and the rest of the year) I wonder what went seriously wrong in my life and career that brought me to this stage. A theory: I attended the wrong college. Yes, I know - and I often tell kids - that in today's-no- jobs-no-future climate, a college degree really doesn't matter, and you are somewhat better off just saving time, student-loan money and heartache by moving directly into your parents' basement and playing videogames. It's what's going to happen anyway. But there is, at least in NE Ohio, one college diploma that might still open a few doors - or would have for me, a long time ago, if I'd tried for it.

Back in my high-school senior year, I was actually accepted at four out of the five colleges to which I applied. But one I never really seriously considered, and thus one to which I didn't bother applying, was the now-in-the-headlines Ohio State University. Yep, home of the Buckeyes.

I can't really say why I wrote off OSU so casually from my life plan. I had heard that it was a huge place in which a student could quite easily get lost in the shuffle, but that didn't really count as a negative for me. Ohio State's student culture, from what I gathered, did strike me rather unfortunately as a "party school," with the undergrads up to their Kangol hats in dope, drink, vandalism and devil-worshipping pseudo-hippie debauchery. Go Buckeyes! But guess what? Turns out all American colleges are like that. Probably even Jerry Falwell's.

No, I think I just grew up hearing so much about OSU that I just took its existence for granted. That was likely a fatal mistake. Sure, just about every Ohioan with an IQ of two digits or more goes to OSU ("Goooooo Buckeyes!"). And you know what? That's the key, the secret handshake, the door-opener, the thing that probably gets graduates jobs in this state. An OSU degree (and Buckeyes football) ties together and uplifts the residents of this place like no other creed, except perhaps Alcoholics Anonymous.

Me, I thought my degree from Syracuse University would make me something of standout in the work world. Now I wonder whether Ohio employers even know Syracuse is real. They probably think it's one of those made-up places, like Middle-Earth or Atlantis or Oz or Khazakstan. Especially if they took Geography at Ohio State.

Yes, now I plainly see where I went wrong, dammit. If only I had gone to Ohio State! I could imagine my post-grad job interview, probably at The Plain Dealer newspaper, where I'd arrive still wearing my cap and gown:

EDITOR: I see you want to be a part of our newspaper. What do you think you have to offer a city newsroom?

EDITOR: What do you see as the pressing issues facing the Cleveland area, and what is journalism's role in pubic policy?

EDITOR: The strife in the Middle East is on the minds of our readers. What do you think of the Israel situation?

ME: You @$!ing A-rabs and Jews, you think you got a rivalry? I'll show you a rivalry! Ohio State vs. Indiana U, that's a rivalry! Go Buckeyes!

EDITOR: Imagine you accidentally meet with President Barack Obama on the street. You have two minutes to talk with him on any subject. What do you say?

ME: Hey, you the valet? Park my car, boy, I've gotta get to the sports bar and watch the OSU game on ESPN. Go Buckeyes!

EDITOR: You're our kind of person. You're hired. Go Buckeyes!

I offer this little aside, not merely to defend my chronic joblessness, but also as a service for Cleveland Movie Blog readers who may be seeing HAPPY VALLEY, Amir Bar-Lev's documentary feature about the sexual-molestation scandal that rocked the campus of Pennsylvania State University in November, 2011. Yes, easy for us here in Buckeye-land to feel smug and superior to the stricken Keystone State folk shown onscreen in the Penn State debacle. But I ask you, given the way college football seems to infect brains around here, Buckeye-mania and all that...are we really any better?

Bar-Lev approaches the case less as a straightforward Court TV true-crime chronicle and more as an ethnographic-correct portrait of the community shaken to its roots by the crisis, with a chorus of eyewitnesses/interviewees.

As we all know, the sex-abuse investigation led to the firing of the most successful college football coach in history, Joe Paterno - who, in a double shocker, suddenly died of cancer within just a few months - and life imprisonment for the convicted perpetrator, Assistant Coach Jerry Sandusky (who appears, breathtakingly, in an adoring, pre-scandal network-TV profile, surrounded by young boys in swimsuits).

Sandusky is not interviewed directly, but his adopted son is. The now-adult man is one of the only members of the Sandusky household to say now that the assistant coach is guilty. This has cost him his second family.

But the tragedy was an across-the-board affair for Penn State, depicted here as a gridiron-monomaniac mini-society in which, as one observer says, Joe Paterno was basically God, while his protégé Sandusky was the functional equivalent of Jesus Christ.

If there is any CAPTURING THE FRIEDMANS-esque sense of injustice having been done here, it is not to exonerate Sandusky, but rather to suggest that the anti-Paterno backlash went overboard, as laborers tear down a campus monument to Coach Joe (a veritable metaphor-come-to-life) while sports authorities strike his unmatched string of college-football wins from the records. The irony, we're told, is that Paterno "ran a clean program" by money-crazed, recruiting-violation-stained modern college-sports standards, and did not deserve his legacy to be vengefully erased.

The narrative also claims that Paterno, though he always sought to live as a good example, never deliberately set about building this insane personality cult around himself. Thus, even less justice in the reaction by fans when things went so bad during their idol's twilight months.

Lessons to take home from HAPPY VALLEY: watch out when uncontrolled hero-worship elevates any ordinary, flawed mortal into a near-deity. Watch out when your community is pretty much defined by a single person/aspect. In a corollary to the former, watch out when you're a college town known for nothing much else.