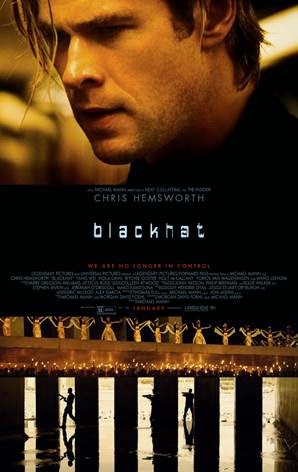 Sometimes, an A-list director can take a grade B (or even C) script and, through his style, vision, and force of will, somehow turn it into a great movie. Other times... not so much. Sadly, BLACKHAT is one of those other times. The film is co-written and directed by Michael Mann, the same guy who gave us MANHUNTER, HEAT, THE INSIDER, and COLLATERAL. Mann's usual trademarks – soft focus cinematography, the driving synth score, a stoic male protagonist who defined mainly by his professionalism in a highly specialized field – are all here. The problem is, the cyber crime plot they're attached to this time around just isn't very compelling, and star Chris Hemsworth shows none of the charisma that made him so likeable as Marvel's THOR.

Hemsworth plays Nicholas Hathaway, a computer hacker/bad ass who gets a reprieve from his prison sentence to help his old college roommate Chen Dawai (Leehom Wang), now employed by China's cyber crimes division, track down an even more dangerous hacker who nearly caused a nucler meltdown. The obligatory love interest is provided by Dawai's sister, Lien (Wei Tang), who is supposedly along for the ride due to her own computer skills, even though the movie doesn't let her do much of anything. Viola Davis is also on hand as Hemsworth's FBI minder, turning in the film's best performance in a relatively minor role.

There is a bad buy in the movie, but he doesn't actually show up on screen for more than 5, maybe 10 minutes, and unlike, say, a Blofeld in the Bond films, Mann never sufficiently builds up this guy's menace in his absence. Plus the guy's big villain-y plot is so ridiculous and convoluted that even Dr. Evil would laugh it off. There are a couple of decent action scenes, but not enough to keep the unnecessarily two hours-plus film from dragging.

Give this same script to some B-movie hack who understands that cheese like this needs to move at a fast enough pace that audiences don't have time to think about how silly it all is, and you might have had an okay piece of entertainment. But in Mann's far too serious hands, it's just an exercise in tedium. 2 out of 4 stars.
Posted by Bob Ignizio at 12:01 AM