[APPROPRIATE BEHAVIOR is now playing in Cleveland exclusively at the Capitol Theatre.] 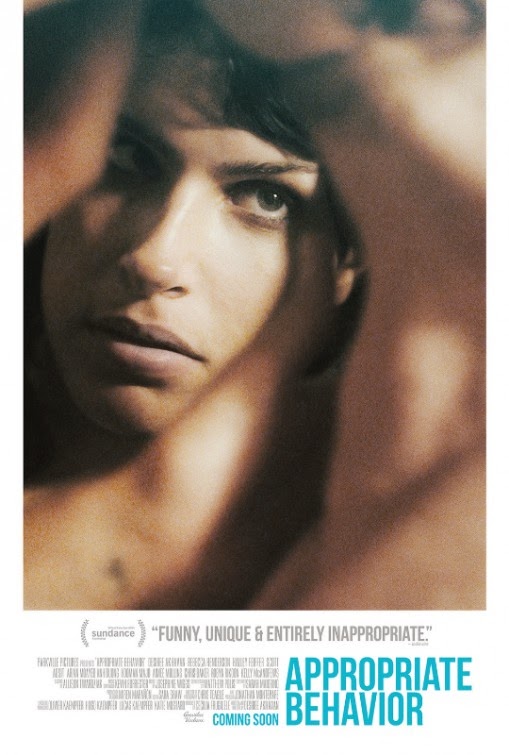 Even though I tend to hate indie rom coms about self absorbed young people living in New York or L.A. and suffering the indignities of complicated love lives and unsatisfying careers, I try to keep an open mind. When my preconceptions are proven wrong, it's worth it. Case in point, APPROPRIATE BEHAVIOR, a genuinely funny film written, directed by, and starring Desiree Akhavan.

Akhavan plays Shirin, a Persian-American bisexual (though mostly lesbian) who has just broken up with her girlfriend Maxine (Rebecca Henderson), largely due to the fact that she won't come out of the closet to her parents. Things on the job front aren't going so well, either, as Shirin takes a job teaching a film class which turns out to be for six year olds. To top it all off, Shirin's brother gets engaged to just the right kind of girl to win parental approval. Unsure how to get her life back on track, Shirin embarks on a series of sexual escapades with men and women, sometimes both at the same time. But what she really wants, or at least thinks she does, is to have Maxine back.

Yes, Shirin is self absorbed, but she has a Woody Allen-esque, self deprecating sense of humor that helps temper her personality. Her character is also more fully fleshed than one often finds in these kind of films, and her problems don't seem nearly as trite or brought on by the character herself as those of, say, the protagonists in TINY FURNITURE or FRANCES HA.

While it's great that APPROPRIATE BEHAVIOR doesn't have an annoying protagonist, in and of itself that wouldn't be enough to recommend the film. But as I mentioned earlier, the movie is quite funny. There's a certain amount of exaggeration, but overall the humor flows naturally from the characters and situations, and regardless of your gender or sexual orientation, is pretty relatable.

The film isn't especially flashy looking, but neither is it bland. The camera may not be moving manically all over the place, but there are some nice compositions. The film also flows really well and doesn't overstay its welcome, so kudos to Sara Shaw for her editing. 3 out of 4 stars.
Posted by Bob Ignizio at 12:15 AM