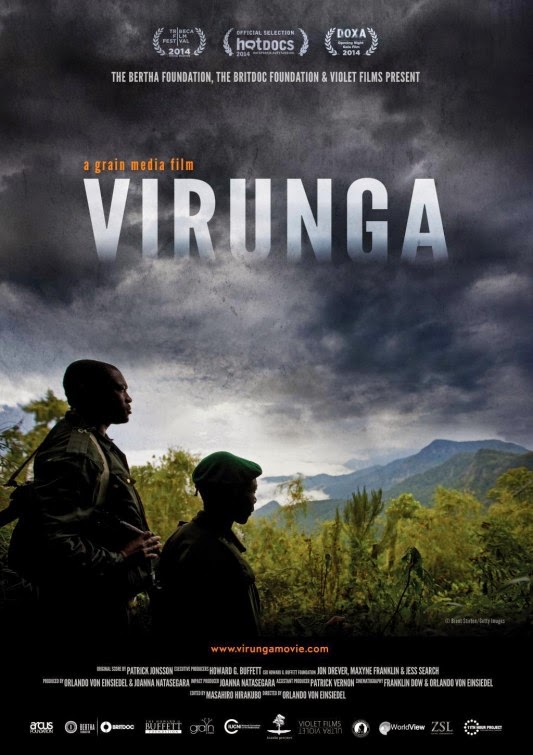 Virunga National Park, located in the Democratic Republic of Congo, a hotbed of violence and political instability, is home to the last mountain gorillas in the world. There, a team of armed park rangers do their best to protect the great apes from poachers and the country's various warring factions. Making matters worse, oil has recently been discovered under the park, and despite its status as protected land the British owned oil company Soco is bound and determined to drill, baby, drill. As one individual associated with the company says, captured on hidden camera by journalist Mélanie Gouby, “I can’t believe that people are protecting the park just for monkeys. Who cares about fucking monkeys?” Thankfully, the park rangers do. In fact, they care enough to lay down their lives – 130 have died protecting the great apes since 1994.

This is a heartbreaking film that shows one of the costs of the world's oil habit. Even if you don't “care about fucking monkeys”, the way that foreign companies and governments have for decades exploited the Congo's natural resources is a major driving force in the seemingly endless violent conflicts the country has endured. In this case, in order to get to the oil, the company (through their hirelings, never directly) is more than willing to get into bed with various factions, indirectly helping to fund continued fighting. Soco denies being aware of this, and perhaps that's true, but based on the evidence presented here it seems unlikely.

Simply relating this fascinating and important story would have been enough to make VIRUNGA worth watching. What makes it truly amazing are some of the incredibly dangerous moments that we see captured on film. It seems frivolous to describe these scenes as like an action film, but that's how they feel, and the tension and suspense are all the more palpable for this being real. Kudos to director Orlando von Einsiede, cinematographer Franklin Dow, and the rest of the crew who put their lives on the line to capture this footage. Also compelling are the more personal stories of some of the rangers, notably gorilla caretaker André Bauma who watches over 4 orphaned gorillas as if they were his own children. 4 out of 4 stars.
Posted by Bob Ignizio at 12:00 AM