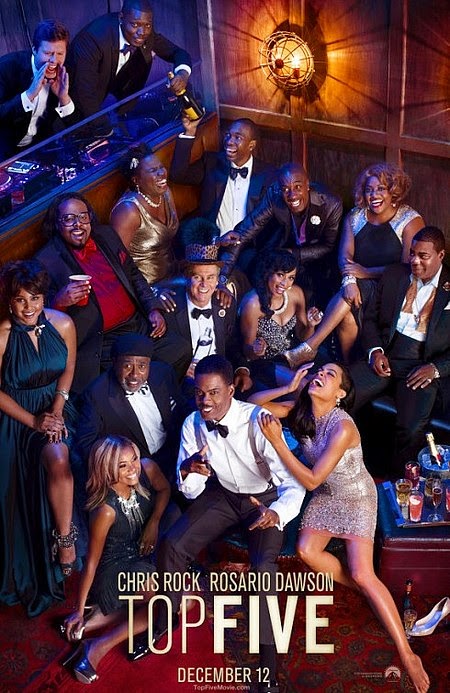 Many consider Chris Rock one the best standup comedians of the last several decades. Unlike most comedians, his is a household name. Just as many people consider Rock a movie star (GROWN UPS, THE LONGEST YARD). But Chris Rock, as stated in recent interviews, disagrees. He pointed out that his film career is filled mostly with decent to forgettable films. His most memorable performance may be for voicing a zebra named Marty in the MADAGASCAR films – Rock has said that the first MADAGASCAR film made more than all his other films combined. It’s no wonder then that for the first time in his career Chris Rock is striking out on his own by writing, directing, starring and even editing TOP FIVE.

In TOP FIVE Rock plays Andre Allen, a famous standup comedian who then becomes a movie star. Critics trash his films. He’s most known for the “Hammy” series where he plays a bear named Hammy. And Allen has lost his nerve to do standup. Is this ringing a bell?

Allen sets out to be taken seriously again by doing a meaningful film, “Uprize,” the story of the Haitian slave revolution. Outside of a few flashback sequences, the audience is watching Allen on opening day for “Uprize.” Allen is also preparing to marry a reality star from the Bravo network, famous for being famous (think Kardashian) – making it that much harder to take Allen’s work seriously. His fiancé, played by Gabrielle Union (THINK LIKE A MAN), is meticulously planning the wedding in California while Allen does press for his new film in New York City.

On top of that, Allen is being shadowed by a New York Times journalist named Chelsea Brown (Rosario Dawson). Allen is understandably skeptical – the Times have brutally attacked his career.

Rock himself often reminds us of why he might be remembered more for Marty the Zebra than his live-action films, and that’s acting. Rock is clever, quick and has a million dollar voice, but ultimately seems to struggle as the leading man. But as a director and writer he lets others around him thrive.

Rock has loaded the cast of TOP FIVE with funny people. Allen’s lifelong friend and bodyguard is played by the always hilarious J.B. Smoove (CURB YOUR ENTHUSIASM, THE MILLERS). When Cedric the Entertainer, Tracy Morgan and Jerry Seinfeld show up, they steal the show, even if briefly. Almost all of Chris Rock’s fictional family are either past or current members of the SATURDAY NIGHT LIVE cast. Their conversations about each of their top five favorite rappers entertain throughout the film, and explain the movie's title.

As Allen and Brown roam the city, we roam with them. The story ebbs and flows with no real purpose except to observe this moment. It’s not always funny. TOP FIVE touches on addiction, fear, relationships and the complications of stardom. Sometimes the ideas hit home (watching Allen crash and burn as a consequence of alcohol works). Other times TOP FIVE seems to miss the mark (the movie is clearly taking aim at the culture of celebrity, but the moral is far too watered down).

For most of the film, it feels like a romantic comedy with occasional crudeness that would make Judd Apatow blush. However, Rock and TOP FIVE are clearly inspired by comedy a la Woody Allen (perhaps the origin of his character last name?).  It’s a slice of life in New York City that provides laughs and thought.

TOP FIVE is not a movie that lingers long after you leave the theater. As a movie, it is what it is. But for Chris Rock, TOP FIVE is a step forward for an artist with something to say. It’s not a biopic, but you can’t help but see Rock in the character. Rock never needed to stand on the shoulders of Adam Sandler and he’s starting to figure it out here.  TOP FIVE isn’t a movie that will transform an audience, but it just might change things for Rock in Hollywood. 2 1/2 out of 4 stars
Posted by Joseph Anthony at 12:01 AM