[possible SPOILER ALERT for anyone who has somehow managed to avoid all the media discussion of this film, it's subject, and its ending. Which is, what, two people?[ 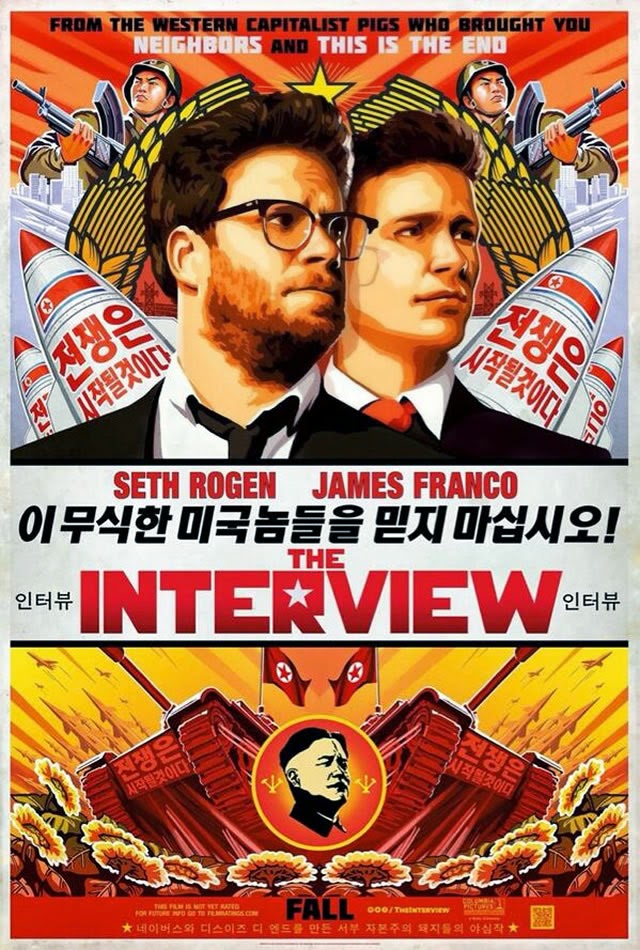 After all the drama around the Sony pictures hack and subsequent information dump, and further threats of terrorists attacks if the company went ahead with its plans to release THE INTERVIEW on Christmas Day, it looked like the James Franco/Seth Rogen comedy would go unreleased, at least in this country. The terrorists, believed to be North Korean, had apparently won. But then Sony apparently rethought their position, and while none of the major theater chains are showing the film, about 300 independent theaters across the country have decided to screen the film for those movie fans willing to take their chances. And given that the terrorist threats were never particularly credible to begin with, those chances are pretty good. Still, those who would rather not tempt fate can rent or buy the film On Demand through Youtube or Google's Play store for Android devices. More out of a desire to not have to leave the house on Christmas Eve than any fear of terrorist attacks, I decided to go the on demand route and watch the film from the comfort of home.

As anyone who pays even cursory attention to world events knows by now, the plot of THE INTERVIEW concerns vapid TV talk show host Dave Skylark (James Franco) and his producer Aaron Rapaport (Seth Rogen) get a chance to interview North Korean dictator Kim Jung-Un (Randall Park), who it turns out is a big fan of Skylark's show. The CIA see this as a golden opportunity to make an assassination attempt on Kim, and manage to convince Skylark to do the deed using a relatively safe plan involving a poison hand shake. Unfortunately they didn't bank on how big of an egocentric idiot Skylark is, and this being a comedy, just about everything that can go wrong does.

As satire, THE INTERVIEW is not particularly sharp, preferring lowbrow belly laughs to more intellectual jabs. But what else would you expect from Rogen and his writing and directing partner Evan Goldberg, who came up with this premise along with screenwriter Dan Sterling? This is pretty much par for the course for these guys, with the mix of violent action and comedy recalling PINEAPPLE EXPRESS in particular. For those not familiar with the duo's oeuvre, it relies heavily on gross-out humor and themes of bromance veering into homoerotic territory for its laughs. And as long as you're okay with that, the film does have some decent gags.

What makes this a lesser film than Rogen and Goldberg's best work (SUPERBAD, PINEAPPLE EXPRESS, THIS IS THE END) is its slapdash plotting and bland characters. It feels like they just came up with the basic idea, wrote a few gags around it, and called it a script. The film's resolution is especially problematic, on the one hand seeming as though it wants to show the best way to bring down a dictator is to take away the god-like aura he presents to his people and show him for the regular, flawed human he is, while on the other hand going for the cheap patriot porn of killing the guy. And not even in all that spectacular a fashion, I might add. Like so much of the film, it's just sloppy and kind of half ass.

The media sideshow surrounding THE INTERVIEW aside, all I really care about as a viewer and a critic is whether its any good or not. In that respect, it's not a terrible film, but it's certainly not a great one, either. There's certainly nothing here nearly as inspired or memorable as Trey Parker and Matt Stone's TEAM AMERICA: WORLD POLICE, the film it most readily lends itself to for comparison. Good for a few laughs, but that's about it. 2 out of 4 stars.