The Gays (now on video) 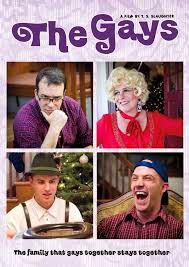 I have this running issue in my life with gay movies. For some reason, despite being a straight guy, I somehow get assigned to watch more than my share of homosexual-specialty fare. Really gay movies. Movies so gay they would be gay-bashed by Matthew Shepard.

Recent events in this country have finally given me a possible explanation.

You see, many years ago, because I was getting nowhere on my miserable Cleveland freelance-writer/photographer earnings, I started a sideline selling black-market loose cigarettes, tax-free, on the streets. What I figure is that police, when they found about this, had three choices:

3 - Arrange for me to have to watch a lot of gay movies.

Being police, they naturally took the most brutal, savage and excessive option. Probably to make an example out of me. Where are my protest marchers? Who will carry on in my memory, shouting the chant: "HANDS UP MEANS NO GAY MOVIES!"?

Just to give you a taste of the nightmarish existence I lead, one recent gig was to review a basic two-character feature called GETTING GO. This is a "found footage" style of gay narrative (and it's not even the first time that was done in gay cinema; believe me, I know) that pretty much breaks down into just two men fondling each other for about an hour and half. There's this college senior, see, who's developed a bad online-voyeur crush on `Go,' a male dancer on the NYC gay club scene. Our hero pretends to be a documentary filmmaker shooting some sort of bio of the near-naked hunk just to get close to him. The rest I leave to your imagination.

O my brothers, my trick in getting through that one was to shut my eyes and pretend it was really GETTING PAM, about a lonely nerd infiltrating the personal space of Pamela Anderson. But even then, I am never sure I could pull that mind trick again to survive the next gay movie.

Still, one that's gayer than GETTING GO would be hard (he-he, Charles wrote "hard") to imagine. Yet, Bob Ignazio himself sheepishly submitted me a new production to review for the straight-to-video section of this blog, an entry that, arguably, is gayer. It's writer-director T.S. Slaughter's short feature THE GAYS.

And you know something? Even though the rules of the Straight Mafia dictate that I say I hated THE GAYS, just as I've come to view queer cinema as my own personal hell...Well, you know, there is no such thing as the Straight Mafia (otherwise I might have used my connections to have a career by now), so I can freely say that I found THE GAYS kind of entertaining, in a scabrous, early John Waters sort of way.

Framed by sitcom-style openings and closings, THE GAYS begins, for reasons best known to the filmmaker, in a West Hollywood gay bar in 1997, where young Alex Gay (Mike Russnak) is describing to a potential pickup his weird, ultra-queer upbringing in suburban Pasadena (pic was actually shot on a low-budget in New York and Connecticut). The hour or so of flashbacks that follow make up the loose, blackout-sketch non-plot.

Turns out the whole Gay family is gay, and always was. By a freak medical syndrome, his "mother," transvestite Bob Gay-Paris (Chris Tanner) was able to produce children via the rare syndrome of a "gay ectopic pregnancy," with the fetus growing on his colon. There's a dandy EXORCIST parody, depicting Alex's surprise birth.

Determined that their offspring, Alex and little brother Tommy (Flip Jergensen) grow up to be ultimate uber-gays, with no stain of heterosexuality, Bob and his husband Rod (Frank Holiday) have raised the kids in a gay-nursery atmosphere of sex toys, penis mobiles, butt-plug-shaped pacifiers, collections of Italian opera, and numerous songs about gay sex (film ends in a veritable medley of sodomy songs set to the tunes of popular Christmas carols. You've been warned).

The humor isn't just tasteless and offensive, it's tasteless and offensive with some vengeful points to make. Bob mentors young Alex on the ways of gay relationships: no strong commitment, ruin your partner's self-esteem whenever possible, and don't even dream of settling down with a permanent mate until you're really old, decrepit and over the hill. Like, in gay terms, over 30.

"Just because you eat the man's ass doesn't mean you owe him dinner," goes some typical Gay parental advice.

In one episode Alex is judged old enough to be given a "gay phone." That's a phone with no keypad. It only receives calls, because there's no way a healthy young gay like Alex is going to the trouble of actually dialing one of his conquests. Why cater to some "needy faggot" that way? Yes, gays get to use that particular f-word with impunity.

I tell you, any hetero who has ever been unlucky enough to date a "rules girl" - and they are in Cleveland, I discovered to my regret - probably knows just the kind of syndrome T.S. Slaughter is portraying here. There is a lot for the adventurous comedy viewers who thought they'd seen it all in THE GAYS (including two guys having sex in a sling, really a sight that burns itself on your brain cells). Fortunately, not too much of a lot. At just over an hour, the satire manages to not overstay its dubious welcome. I expect that the untypical running time, not to mention general transgression, has kept this title out of the programming even of gay-specialty film festivals.

I cannot and will not decide if Chris Tanner, AKA the tuneful "Bob Gay-Paris" is scary-good or just scary. I can't promise you that T.S. Slaughter will ever score points for creative mise-en-scene or intricate scenarios. I cannot even promise that you'll get as much out of THE GAYS as I did - don't forget, I live under this gay-curse sort of a thing. But Slaughter's extreme sitcom entertained me more than I thought it might (actually, my expectations are so low these days I didn't really try to think on it one way or another), and that's something. Now if you must excuse me, I have to go and recover with binge-watching in my sideline of reviewing Japanese cartoon porn. And I don't like the Japanese much either. But that's another story. (2 out of 4 stars)

You can get more info on the film and order it if you like by visiting it's website.