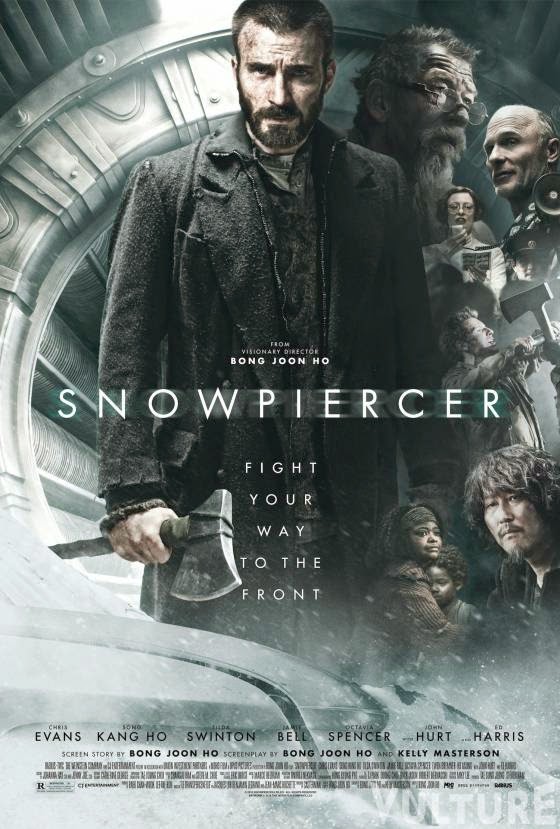 The post apocalyptic sci-fi scenario in SNOWPIERCER has to be one of the strangest ones ever conceived. Scientists trying to stave off the effects of global warming accidentally send the earth into a new ice age. The last surviving humans now live on a high speed, perpetually moving train. Those who bought their way on form an elite upper class that lives in the front of the train. Those less wealthy masses on board live in squalor at the tail end where they eat processed black foodstuff of questionable origin, get high on a drug made from the byproducts of the train's fuel, and occasionally mount rebellions that the elite put down with little effort.

As the film begins, yet another rebellion is being plotted by Curtis (Chris Evans) and his mentor Gilliam (John Hurt). The next time the guards show up to feed the tail dwellers, they force their way into the prison car and free Namgoong Minsu (Song Kang-ho), a drug addict who designed the security systems on the train, and his daughter Yona (Go Ah-sung) who has psychic abilities. With these two in tow, the tail dwellers believe they have a chance to make it all the way to the engine and take control. Standing in their way are the train's security forces under the command of Mason (Tilda Swinton), second only the train's creator, Wilford (Ed Harris).

Although based on a French graphic novel, director Bong Joon-ho rewrote the story to suit his own ends, with writer Kelly Masterson doing a final rewrite. The end result is a finely tuned screenplay that conveys its socio-political allegory clearly without sacrificing any of the action, fantasy, or dark humor inherent in the material. There is considerable attention to detail throughout, and the film creates a truly amazing yet almost believable world within the confines of a speeding train.

That said, of course the concept is preposterous. This is not the kind of film that gets hung up on realism at all, and it's all the better for it. Just for starters, you couldn't possibly have a performance like the one Swinton gives here in a more realistic film. But the movie does an excellent job creating its own world and playing by the rules for that world that it lays out. As long as you can go along with it, you'll have fun, you'll have your imagination stimulated, and you'll spend a little time thinking about class and economic issues without feeling like you're being lectured, which is exactly the sort of thing good intelligent sci-fi films are supposed to do. 3 1/2 out of 4 stars.
Posted by Bob Ignizio at 12:00 AM