[ROCKS IN MY POCKETS screens Saturday December 6 th at 7:00 pm and Sunday December 7 th at 4:30 pm at the Cleveland Cinematheque.] 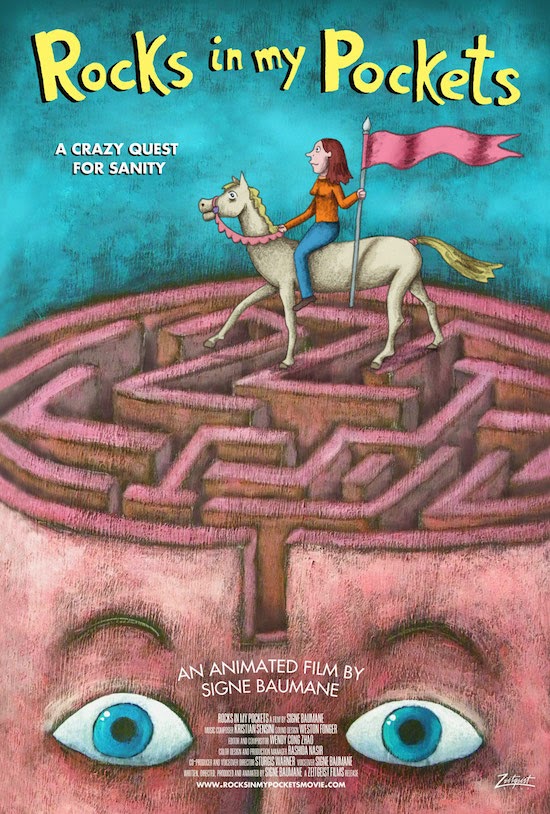 ROCKS IN MY POCKETS is the kind of film that reminds you that award season is right around the corner. It is sure to be nominated for a few categories including Best Animated Feature and Best Foreign Language Film, and if you are like me it is sure to bore the daylights out of you.

Written, directed and starring Signe Baumane, ROCKS IN MY POCKETS tells the tale of several generations of women in Baumane’s family (including herself) who suffered from depression. The depression often leads to suicide or being locked up, and the ultimate meaning of the movie is how our narrator deals with the depression in modern times. Of course Baumane lives in modern day New York City and not a war torn Latvia, so it is a little easier for her to deal with her demons by making an animated piece of pretentious soul searching than it was for her ancestors.

Yes, this is an animated tale of female despair, using several different types of animation in its attempts to bore you along the way. There are no other actors involved other than the creator’s narration and her Latvian accent only adds to the boredom (and pretension) of the piece.

I chose to review this film because I suffer from depression as well, and depression has affected many of the people in my family for generations, often resulting in suicide or incarceration of some type. Because of that I thought I would find some common ground with this film, and at times I did enjoy as well as relate to the material in this piece. Not enough to recommend it, though.

Perhaps the material being of such a personal nature made it difficult for Baumane to self edit, but the movie only runs an hour and a half and,yet it seemed like it ran twice that. It also might have been better served as a live action series of vignettes rather than the animation styles used here. Or it might have worked better with JUST the animation and a music CD playing in the background like they do with THE WIZARD OF OZ and Pink Floyd As it is, though, I really only found a few moments of entertainment in this film.

This film will probably hit its target audience in the middle-aged ‘woman power’ group and the young, black eyeliner, arm slashing demographic and that is not necessarily a bad thing, but it is far from a broad appeal work of art. Men are often vilified and the women mostly stand around looking out windows and being depressed. I wasn’t depressed when I sat down to watch ROCKS IN MY POCKETS, but I certainly felt that way when it was over.
Posted by Bob Ignizio at 12:00 AM