Repost: Daisies (December 28th at the Cleveland Museum of Art)

[DAISIES screens Sunday December 28th at 1:30 pm at the Cleveland Museum of Art.] 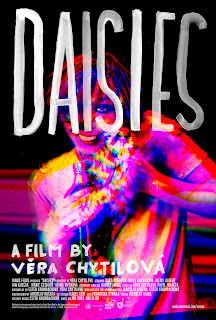 In one of my few remaining paid gigs, I must review a self-published book of essays in which the author, in one of his more compelling arguments, says, in effect, that if you think Thomas Kinkade is awful, just look at all the real crap perpetrated in the name of "modern art." By those standard's he's an Old Master. I'm not holding my breath for that writer to come and speak at the new MOCA, but I grokk what he's saying after watching DAISIES.  Maybe Alfred Jarry could make heads or tails out of DAISIES, originally known as SEDMIKRASKY when it arose from artistic climate of Czechoslovakia’s “Prague Spring.” But I couldn't decipher it, and I'm supposed to be largely Czech by descent and temperament myself.

The absurdist, positively dadaist feature was a minor cause celebre at the time, being banned at home and leading to a long-term blacklisting of directorial newcomer Vera Chytilova, who had to get gigs for a while afterwards under her husband’s name (feminists thus considered her quite the martyr, though Wikipedia informs me she bounced back and now teaches at FAMU). DAISIES has little tangible plot to speak of but does boast two striking leads, blonde Julie (AKA Jarmila, I think, or Marie) and a brunette also named Marie, sexy nymphets who determine in the first scene that the whole world is spoiled, so why shouldn't they be spoiled in return? That would seem to be the point of departure for a lot of odd proto-psychedelic antics and nonsense dialogues in and around Prague.

The duo wear a variety of skimpy outfits and, from time to time, get wined and dined and courted by smitten men, whom they tease but abandon, as the girls are photographed in a variety of trick lenses and varicolored/mismatched film stock and interposed with grainy stock footage of war. There are also montages of locks and doors, and a few truly striking juxtapositions of shapes and op-art patterns. Nobody can call DAISIES behind the times; visuals anticipates the MTV music-video aesthete, as well as the notorious “head” pictures of the hippie era. And what looks to me like computer-graphics digital f/x filters are insinuated into the re-release. Much as Adobe AfterEffects have rendered a service to humanity, I was more charmed by the low-tech Georges Melies whimsy trick shot when the heroines decapitate each other with scissors, their heads still floating around and conversing a la Big Chuck and Little John. Cinematographer Jaroslav Kucera – the director’s abovementioned husband – did know his stuff.

More than I know, I confess, on how to appreciate DAISIES. At feature length the thing tended to frustrate me more than anything else, and I admit, made me sympathize somewhat for those Soviet biggies sitting in the Kremlin, having exported lots of roubles to their Czech ally for hydroelectic dam-building or weapons or something, and happening to get DAISIES back instead. I'd be sorely tempted to send at least a few Red Army divisions in there to ask WTF, comrades? Or at least to see if Czech girls really look like this. I wouldn't be surprised if DAISIES played the old Heights Art Theater in Coventry, back when it teetered between racy foreign imports and outright porn (anyone actually go there, to the Heights Art, in those days? Just the ads in the old Cleveland Press made my childhood self in Mayfield Heights resolve not to leave the house).

At its initial release, DAISIES got compared by Time Magazine to the Marx Brothers (Harpo in particular), and other commentators have invoked the anarchy of Max Sennett and the Keystone Kops. Well, that’s fair, I guess. At my most open-minded it made me think of a sort of Eastern European riff on the Monkees. But not as linear, and without the great music. On the plus side, the Monkees never would have looked this good in lingerie. But really, folks, compared to DAISIES, Yugoslavian Dusan Makavejev and his infamous, avant-garde contemporary W.R. - MYSTERIES OF THE ORGANISM is ACT OF VALOR.

There's a "dedication" at the end of the film that I won't ruin for you because it doesn't much mean anything, except maybe to celebrate chaos or something. I guess deep down I’m just a Thomas Kinkade guy. Though such is my mistrust of artists in general it wouldn’t surprise me if Kinkade too had a secret stash of Extreme Cubist he’d done that he couldn’t show anyone because it poked eyes out. (1 3/4 out of 4 stars, more if you are stoned)
Posted by Bob Ignizio at 12:00 AM