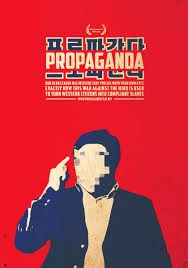 It's a few years late and a dollar (lots of dollars, really) short for another one of those trendy lefty documentaries bashing big corporations and the government-industrial complex - but offering no other alternatives or solutions, other than maybe legalizing pot, giving Mumia the Nobel Prize, and having a big jam-band festival.

You remember them, right? Those documentaries, I mean. Let's see, there was INSIDE JOB, THE CORPORATION, virtually Michael Moore's  entire canon but especially CAPITALISM: A LOVE STORY, Eugene Jarecki's WHY WE FIGHT, the YES MEN films, THE SHOCK DOCTRINE, HEIST, WE'RE NOT BROKE, THE FLAW etc. Not to mention the many Iraq movies in which Bush-Cheney-Halliburton Inc. were guest villains.

It's not that that modern "savage capitalism" (a phrase I do believe Pope John-Paul II used, if I'm not mistaken) didn't deserve a beating. It should have been clubbed with police nightsticks, after Wall Street took the American economy to the brink of complete collapse, and manufacturing - and later most other free-enterprisers - laid off/downsized every worker possible in favor of Chinese slaves and outsourcing Indians to maximize CEO and shareholder profits.

But when the motion-picture media is the principle accuser in matters of capitalist injustice...well, have you taken a good look at the business ethics behind showbiz? These folks were larcenous scumbags of longstanding, practically going all the way back to Edison. You want these fast-buck, crooks to tell you that Main Street USA is corrupt?


It had seemed to me for a while now that the only proper angle left for more celluloid bashing of the moneybags would be a broad parody of Michael Moore-type movies, in the AIRPLANE! tradition (and AIRPLANE! co-creator Jim Abrams, a high-profile Hollywood conservative, would be the one to do it, too). But instead, here comes the video release of New Zealand-born Slavko Martinov's PROPAGANDA, which I understand was some kind of an internet sensation earlier. Is it actual far-left liberalism, or a crafty spoof of the warped mindsets of the Occupy Wall Street misfits? I must admit, I still don't know.

The iffy mockumentary-gimmick premise is that your are watching a film smuggled out of insular North Korea, in which agents for the Pyonyang dictatorship have scrutinized the west at length and now (with a sharp British-accented, English-language voiceover) report back to Communist comrades and their fearless leader about how the "democratic" world really works. TV news images and stock footage illustrate their conclusions, which are these:

- US presidents and UK prime ministers, Barack Obama included, are all corporate-controlled puppet warmonger imperialists. For some reason, they also steadfastly support and enable the Rothschild-founded terrorist rogue-state called Israel.

- Celebrities and pseudo-icons continually draw the common person's attention from any effort to make positive social change. We are given the names of a few of these headline-dominating, distracting people, such as Paris Hilton. "She does nothing," the narrator intones.Yet she is paid thousands to attend parties.

As clever as the faux North Korea angle is, the narrative trick is a familiar one, a summing up of our modern culture through the eyes of a complete stranger. Other movies (and books, like Brave New World, and plays such as Gore Vidal's Visit to a Small Planet) used space aliens or sheltered primitives. Martinov uses the (offscreen) Kim Jung Un. And the director's message seems to be that even the ultimate outsider, dictator Kim, can have a stronger grasp on what's REALLY going down than the numbed moron masses living in the so-called "free world."

Or...maybe not. Perhaps PROPAGANDA is sheer sarcasm, one that asserts that the declared political creed of 21st-century liberal opinion-leaders, smug academics and scruffy Occupy protesters just happens to fit perfectly with what this film represents, the demented, paranoid POV of the worst of all living world leaders. So f*#! the Left and all their candlelight vigils and V FOR VENDETTA Halloween masks after all.

I dunno, frankly. I know I should be intrigued by this have-it-both ways ambiguity, and I salute the movie’s inherent cleverness. But mostly I found this stuff old news (even if hoaxed). Viewers should be advised that PROPAGANDA's media-barrage style of news clips and upcycled footage are sometimes hideously violent - especially in mutilated Palestinians and abused animals. The movie was certainly a different way to serve up the familiar critiques, if that's what they were. To judge from this mockumentary's embrace at "social-justice" film fests, if PROPAGANDA is a joke, the pablum-puking liberals don't get it. But I doubt the right-wing Nazis would either. I wonder what Alex Jones thinks. (2 3/4 out of 4 stars)