[MURDER OF A CAT opens in Cleveland on Friday December 5th exclusively at Shaker Square Cinemas.] 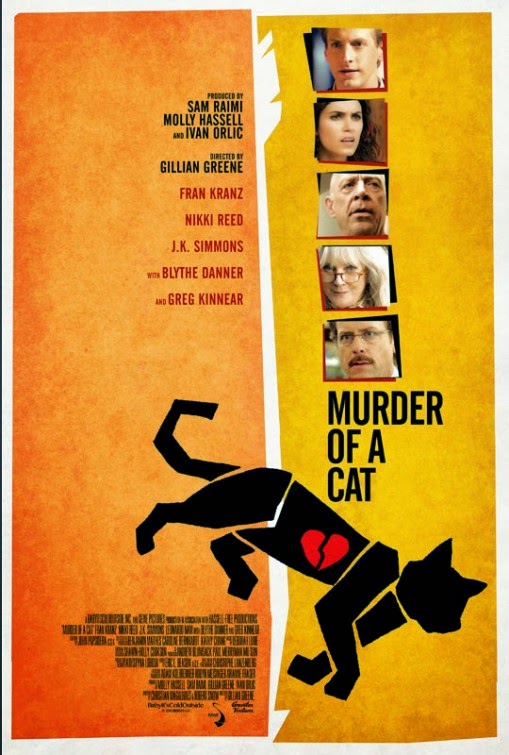 There's an old Hollywood sensibility about the unassuming little comedy MURDER OF A CAT that's refreshingly out of step with the times. Blending hard boiled noir mystery and screwball comedy with just enough modern realism to avoid turning into a retro homage, MURDER begins by introducing us to Clinton (Franz Kranz), a clueless man-boy who still lives at home with his mom (Blythe Danner), and considers his cat Mouser his best friend in the world. His local comic book store having gone out of business (Clinton blames the arrival of a big box store owned by Ford (Greg Kinnear), Clinton now spends his days having a perpetual garage sale in his mom's front yard, and making his own line of action figures.

Clinton's idyllic world is shattered, however, when Mouser turns up dead from a crossbow bolt. Sheriff Hoyle (J.K. Simmons) makes a cursory investigation, but it's clear that even in this small town he has bigger things to deal with that a dead cat. So Clinton takes matters into his own hands, quickly discovering a lost cat poster with what appears to be Mouser's picture. Further investigation reveals that Mouser was “moonlighting”, splitting his time between Clinton and hairstylist Greta (Nikki Reed). After some initial mistrust, Mouser's two owners set out to find the feline's killer, eventually getting pulled in to an even bigger mystery involving the selling of stolen electronics from Ford's megastore. Of course the web of intrigue never gets too threatening, and the film is played more for laughs than suspense. Still, it has fun putting odd spins on familiar noir conventions, and there are plenty of twists and turns in the plot to insure the mystery remains interesting.

Aside from the classic Hollywood influences, MURDER also recalls more recent films. Kranz' Clinton isn't as cartoonish, but there's a quality to the character that makes one think of Pee Wee Herman in PEE WEE'S BIG ADVENTURE. There's also a bit of THE BIG LEBOWSKI, and a touch of PINEAPPLE EXPRESS. It's just that where those films all went big, this one stays a little more intimate and grounded, making for a different but nonetheless satisfying kind of entertainment.

After watching the film I looked up director Gillian Greene and learned she is married to EVIL DEAD and SPIDER-MAN director Sam Raimi (who also produced MURDER). Makes sense. Based on the evidence here, the two of them share a similar sense of humor, although Greene doesn't go in for quite as much Three Stooges style slapstick as her husband. She also has a different style of directing which is less reliant on camera movements, and she has different overall concerns, being more interested in her characters emotions.

Greene may not be a showy director, but she has good comic timing and, perhaps most importantly, is able to make what is a fairly ridiculous and convoluted story seem relatable. Lucky for us, as one could easily imagine the script by Robert Snow and Christian Magalhaes in other hands (say, the Farelly Brothers) being turned into something more crass that might have been more marketable (and generic).

The cast is also quite good, with Kranz walking a fine line between full-on Jim Carrey style lunacy and something a little more real world and likeable. Reed, best known for playing Rosalie Hale in the TWILIGHT series, does the girl with a tough exterior but a heart of gold thing well, and while this film wouldn't pass the Bechdel test, at least gives us a female character who is an active and interesting participant in the plot. Simmons doesn't really have enough to do here to make as strong of an impression as he usually does, but at least Greg Kinnear gets one of the better comic roles he's had in some time.

MURDER OF A CAT. It isn't trying to be a big blockbuster, it isn't going for the Oscar, and it doesn't have that hip indie attitude. It's just a little movie that wants to have fun with a clever story and some crazy characters. For those who can appreciate the pleasures of a small film of this sort, it does that just fine. 3 out of 4 stars.
Posted by Bob Ignizio at 12:00 AM