Glen Campbell: I'll Be Me (opens in Cleveland December 12th exclusively at the Cedar Lee Theatre)

[GLEN CAMPBELL: I'LL BE ME opens in Cleveland on Friday December 12th exclusively at the Cedar Lee Theatre.] 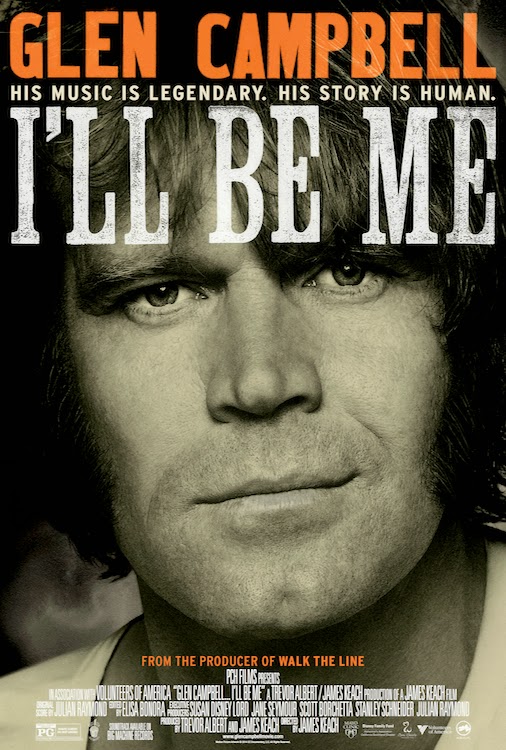 All the stuff one usually finds in a show business biographical documentary is dispensed with during the opening credits of James Keach's GLEN CAMPBELL: I'LL BE ME. This isn't a movie about how Campbell rose from nothing to fame and fortune; rather, it devotes its running time to the singer/songwriter/guitar player's final tour. Final, because as the film begins, Campbell and his third wife Kim get the official diagnosis that he has Alzheimer's disease, and at the rate he is deteriorating anything more just won't be feasible.

Campbell is inspiring as he shows he can still put on a first rate show as long as his teleprompter is working. Given the way that Alzheimer's usually works, Campbell's Doctors are surprised that he can keep doing it, but evidently the part of his brain devoted to music is so highly developed that it's the last thing to go At the same time, the film is heartbreaking as we see Campbell slowly deteriorate, still able to play the hell out of his guitar but becoming increasingly confused and frustrated with almost every other aspect of his life. There does seem to be part of the man that's almost grateful for the loss of some memories, something he alludes to a few times, but one can't imagine he wanted to forget the names of his own children.

It's hardly a spoiler to say that, in the end, Campbell doesn't beat the disease. That's just a given, since at present there is no cure for Alzheimers. But Campbell and this film show that while it may be a losing battle, one can at least fight it with dignity. 4 out of 4 stars.
Posted by Bob Ignizio at 12:00 AM