Filmage: the Story of Descendents/All (December 12th at the Cleveland Cinematheque)

[FILMAGE: THE STORY OF DESCENDENTS/ALL screens Friday December 12th at 9:25 pm at the Cleveland Cinematheque.] 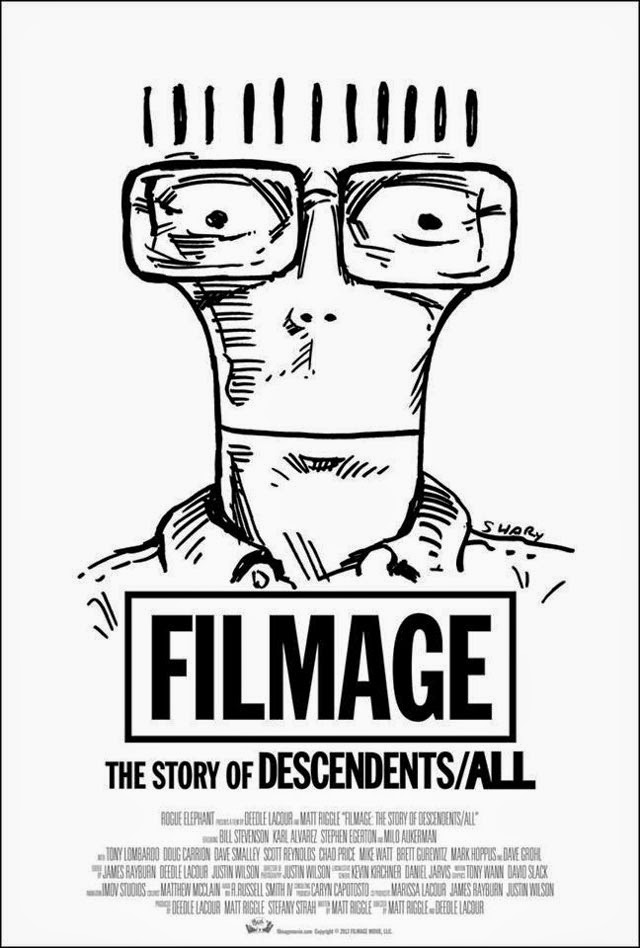 FILMAGE: THE STORY OF DESCENDENTS/ALL is a documentary about pop-punk and nerd-rock forefather Bill Stevenson and his life as a punk rock musician and producer. As a lifetime band guy in the same genre, I approached this film with glee and it did not disappoint.

There really is nothing to distinguish this Deedle Lacour & Matt Riggle directed documentary from any other documentary as the first time directors follow all the steps. It starts at the childhood, goes to the first band and onto the rises and falls most bands face all the while cutting to bandmate’s current and past, as well as a few more famous folks. Interviewees include Milo Auckerman, Karl Alvarez, Keith Morris, Chuck Dukowski, Mike Watt of the Minutemen, Mark Hoppus from Blink 182, NOFX front man Fat Mike, and the great white hope of rock-n-roll himself, Dave Grohl, as well as several friends and management figures.

The basic theme is that despite the influence The Descendents have had on many big time bands, they remain somewhat unknown. It covers every line-up and every band that Stevenson was/is part of, including his time in the legendary Black Flag. It also covers Bill's passion for punk, health issues, and family problems that drove him deeper into his music.

Clearly made by fans for fans, I found this film to be highly entertaining and enlightening. As a punk rocker from the 80s I have been a fan of Mr. Stevenson and his bands The Descendents and All for most of my life, yet never really knew what the issues were behind line-up splits and the band changing names back and forth and back again between The Descendents and All. There is not a lot of meat to this film and I am sure many of the more seedy or angst filled issues are glossed over, yet I found it to be informative and engaging despite the kid gloves the subject matter is treated with.

Around the middle of the film it does seem a bit repetitive as the band goes through several singers in an attempt to replace the on-again/off-again presence of popular front man Milo Auckerman. Each singer's story seems to be pretty much the same and there gets to be a point where it becomes difficult to keep up with how many singers they have been through. But after giving every past member his due on film, the story gets more engaging as the band finds sure footing and learns how to survive as both All and The Descendents.

There are so many unique aspects to these two seminal bands and their lasting influence. This drummer-led band that invented nerd core and melodic punk with a passion and drive that few bands these days could even dream of coming close to still seems to have life left in them, and this film is a celebration of the music they made and their place in punk rock, and dare I say, rock and roll, history. 3 out of 4 stars.
Posted by Bob Ignizio at 2:00 PM