Fantasia, with the Cleveland Orchestra, December 11 at 7:30 p.m. 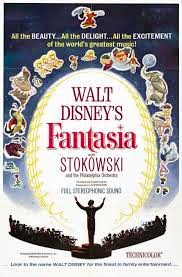 BREAKING NEWS: The Cleveland Police have shot Mickey Mouse. The classic cartoon character, 86, was pronounced dead on arrival at University Hospital. Officers said they were responding to a call about a male rodent, largely black in color, waving around a magic wand in University Circle in a threatening manner. Police saw the rodent - dressed in a costume and pointed hat covered in occult/gang symbols - using the wand to make starbursts in the sky and command a legion of broomsticks to carry pails of water. Police felt there was a threat to public safety and acted in accordance with department policy. Mickey Mouse was hit with an estimated 877 rounds. Said a Police spokesman, "He was only a mouse, so we held back a little."

Okay, sorry, I couldn't resist. There are those who think I could have made a good living writing comedy. Then again, there are those who thought I could have made a good living writing. Look how mistaken they turned out to be. And any opportunity to vent over my misfortunes at Cleveland is fair game. The above paragraph, in fact, was inspired by the fact that on Thursday evening, at Severance Hall, the mighty Cleveland Orchestra will perform live alongside the classic FANTASIA, from 1940.

The Walt Disney immortal was a commercial disappointment in its initial bow - partially because of the elaborate and costly sound system that Disney mandated had to be installed in theaters to accommodate it.  But FANTASIA was to be rediscovered and cherished in re-release by later audiences - especially the 1960s counterculture, who embraced it as a trippy "head" film (which conservative Walt probably would have considered an outrage). Maybe you'll see some Cheech'n'Chong types in the Severance Hall audience as well. Wouldn't surprise me, at this point.

(But watch out if anyone is selling loose, hand-rolled reefers, tax-free, there by Wade Oval. Cops will put you into a fatal chokehold. Personally, I could see that happening to Goofy)

There is no plot to FANTASIA, of course. It's basically a supersized expansion of the "Silly Symphony" shorts that Disney had been doing throughout the 1930s, choreographing cartoon imagery to orchestral music. Only in this case the animation was some of the most splendid the Disney studios could offer, and the music was Stravinsky, Beethoven, Bach (represented in purely abstract visuals, as experimental as old Walt ever got), Tchaikovsky's "Nutcracker Suite" and the macabre, demonic "Night on Bald Mountain."

The "Sorcerer's Apprentice" segment with Mickey Mouse (and conductor Leopold Stokowski as himself) was originally supposed to be a standalone short subject, but when it got too expensive Disney decided to insert it in FANTASIA instead.

This is a Christmas-treat all-ages special, part of an "At the Movies" series, begun in late 2012, in which the mighty Cleveland Orchestra loosens up its black tie a little bit and performs soundtrack accompaniments to great films, with silent-era favorites and Hitchcock among the past attractions.