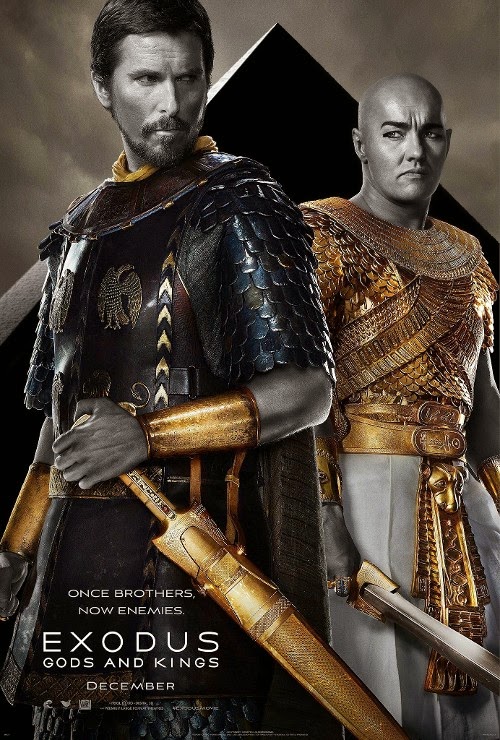 Director Ridley Scott returns to the epic sword and sandal territory with EXODUS: GODS AND KINGS, his gritty, action packed version of the Moses story. At the center of Scott's take on the tale is the relationship between Rameses II (Joel Edgerton), next in line to be Pharaoh of Egypt, and his adopted brother Moses (Christian Bale). The two are good friends until a prophecy that seems to indicate Moses will become a great leader despite his lack of a blood claim to the throne comes between them.

When Ramesses comes to power it comes out that Moses isn't Egyptian, but a Hebrew. It also comes to light that Moses has killed an Egyptian. Unable to bring himself to execute his brother, Ramesses instead exiles him to the dessert. There Moses meets and marries the lovely Zipporah (Maria Valverde) and for a while lives in relative peace and happiness.

While trying to retrieve some sheep during a storm, Moses is severely injured. He sees (or possibly hallucinates) a burning bush and a small boy who says that he is God. God tells Moses he wants him to lead the Hebrews to freedom, and after making his recovery, Moses sets out to do just that. His plan is to teach the Hebrews how to wage guerrilla war, which they do for a while. That isn't getting the job done nearly fast enough for God, though, so he pulls Moses aside and explains he has a more expedient way to get the job done.

The plagues are depicted in a decidedly ugly and brutal manner, which seems fair given that the Old Testament God was not one for niceties, particularly where His enemies were concerned. Scott starts things off in especially spectacular fashion by depicting the Nile turning into blood as the result of giant crocodile attacks. If I had been Pharaoh, I probably would have caved right there. But even Biblically clueless folks like me know that's not the way the story goes. It takes until the tenth plague, death of the first born, for Rameses to finally let Moses' people go.

I never read the book of Exodus; I only know the broad details that are more or less common knowledge even to heathens like myself, and what I could glom from a quick perusal of Wikipedia. From what I can tell, there's probably a little more in the way of bad-ass battle scenes than in the source material, and a few things here and there have been tweaked (Moses' brother Aaron doesn't do the talking for him as he does in the Good Book). Overall, though, this is essentially the story it purports to be, and not another NOAH. At least there are no rock men here.

That said, some believers have had problems with the way Scott and his screenwriters ( ) treat the more miraculous aspects of the story. In keeping with the film's gritty, realistic tone, the plagues, the parting of the Red Sea, and Moses' conversations with God are all depicted in such a way that one could attribute other explanations for them than the divine if he or she so chooses. Based solely on what is in the movie itself, that's relatively easy to do for the first few plagues. However, by the time we've made it to the curse of the first-born it requires far more suspension of disbelief to hold on to a “natural” explanation of events than to just go with the whole God thing. The film seems to be aware of this fact, including a scene in which one of Pharaoh's advisers has to bend over backwards to come up with a natural explanation for what's taking place. He's clearly meant to look a fool, and his adherence to rational explanations winds up serving him very poorly indeed.

There's also a whole other issue regarding the race of the lead actors. There's not much debating it: Bale doesn't look especially middle-eastern, and Edgerton definitely doesn't look Egyptian. It wasn't a deal breaker for me, but I get why some viewers are upset by the casting. Focusing on the stars' performances rather than their skin tone, both Edgerton and Bale largely eschew the nuance and subtlety they're both very much capable of in favor of hammy epic movie emoting.

The end result is a movie that at times seems to be working against itself. As a big budget action spectacle it still works for the most part, but it's definitely a lesser film in Scott's oeuvre, better than his depressing take on ROBIN HOOD, but falling well short of GLADIATOR level. Despite its late in the year release date, in no way, shape, or form should EXODUS: GODS AND KINGS be considered legitimate Oscar bait, but it does at least entertain. 2 ½ out of 4 stars.