Cheatin' (December 5th and 7th at the Cleveland Cinematheque) 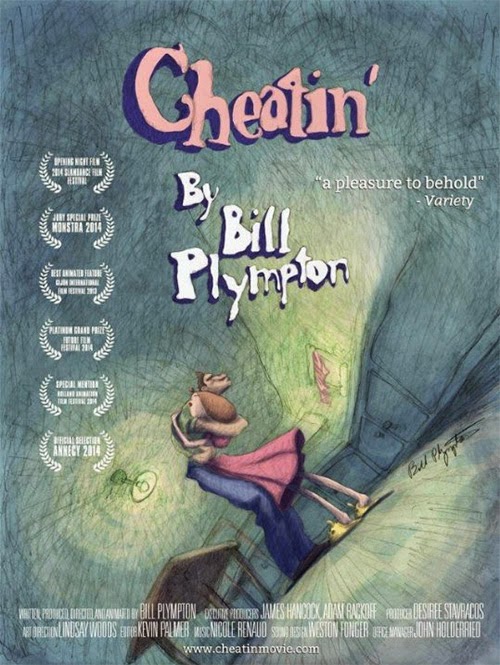 Animator Bill Plympton has a style that is immediately recognizable to anyone who has seen even one of his odd and often disturbing works. Perhaps best known for his short films, two of which have been nominated for Academy Awards, Plympton has also made six features, the latest being CHEATIN'.

As the title suggests, CHEATIN' concerns itself with infidelity. The film begins with a bizarre “meet cute” in which an impossibly proportioned burly hunk becomes smitten with an equally impossible woman while at the carnival. The lunk ditches his date to save the woman from certain death on the bumper cars, and the newly minted couple run off to cohabitational bliss. Other lovelies try to get the lunk's attention, but he brushes them all aside.

One day, however, one of the many spurned ladies slips the lunk a photo of his beloved in what appears to be a very compromising position. Heartbroken, he goes tearing through town in his car and almost drives off a cliff. After calming down, the lunk decides that the best way to deal with the situation is to get a little on the side for himself. Eventually his beloved finds out embarks on a quest for revenge in outrageous and fantastical fashion.

Given how painfully generic most animated features are, it's refreshing just to see a filmmaker showing that long form animation has so much more potential than another CGI family flick. One has to appreciate the pure artistic vision being expressed here.  That said, although the film has its pleasures, CHEATIN's twisted charm runs out well before the end. I had similar feelings about the other Plympton feature I've seen, I MARRIED A STRANGE PERSON. And yet I generally enjoy his shorts. Perhaps he just works better in small doses.  2 ½ out of 4 stars.
Posted by Bob Ignizio at 12:00 AM