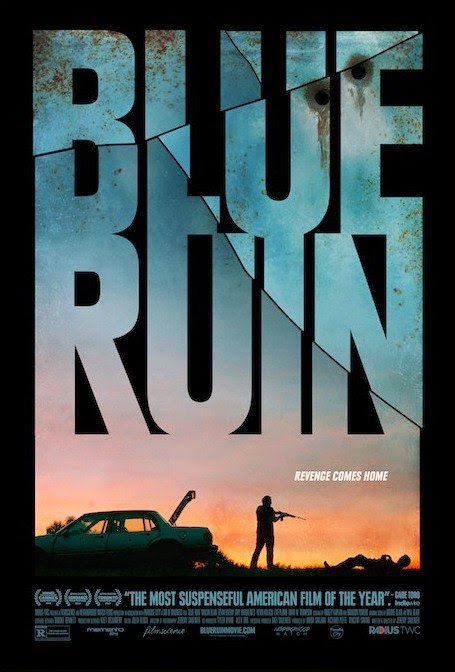 When we first meet Dwight Evans (Macon Blair) in the grim revenge thriller BLUE RUIN, he's living out of his car and eating out of dumpsters. A police officer takes Dwight aside not to cite him, but to let him know that Wade Cleland, the man convicted of killing Dwight's parents, is being released from prison. Suddenly Dwight has a new sense of purpose. He follows Wade as he is released from prison and kills the man with relative ease. What comes after will be anything but easy.

Dwight realizes his actions have put his sister and her family in danger of retaliation from Wade's family, so after getting her to leave town he sets a trap at her house. When members of the Cleland family show up, Dwight captures Wade's brother Teddy (Kevin Kolack), who eventually reveals the real story of who killed Dwight's parent's and why. By this point Dwight just wants to end the cycle of violence and ensure his sister's safety, but the chances of that happening don't look good.

The central theme of BLUE RUIN can pretty much be summed up by the old saying, “He who seeks vengeance must dig two graves; one for his enemy & one for himself.” Of course by the time the closing credits roll, two graves aren't nearly enough. Writer/director/cinematographer Jeremy Saulnier shoots his film with a cool, moody style that some might see as hypocritical, glorifying the violence it's condemning. Sure, the film looks slick and is full of violent spectacle, but anyone who thinks the film is endorsing eye for an eye vigilante justice simply isn't paying attention.

The film's visuals remain just as compelling in its less bloody moments. This is the kind of movie where a half hour can go by with scarcely any dialogue, and that's just fine. Credit also goes to the strong central performance by Blair, who accomplishes much with very little, and a fine supporting cast, all relative unknowns except for Eve Plumb (The Brady Bunch) in a small part. Sure it's a familiar plot, and we've seen these themes explored many times before. But the way Saulnier and company tell the story makes it just as compelling as if it were the first time. 3 ½ out of 4 stars.
Posted by Bob Ignizio at 12:00 AM