Big Joy: The Adventures of James Broughton (December 4th at the Cleveland Cinematheque) 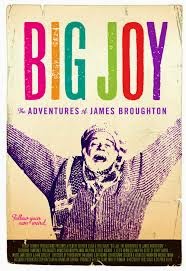 Want to know a true, humiliating fact about Charles Cassady? When I was growing up, I had a warped idea of what "gay" meant. Connecting it in my logical, innocent young mind (since then, largely destroyed) with the traditional use of the word "gay" and its derivations ("gaily"), I simply assumed that, when I watched some TV drama and there was a scandalous revelation that a male character was "gay," all it meant, very simply, was that he was too shamefully happy and disgustingly flippant to ever fit into functional society.

Really, that's what I believed - that "gay" men had a crippling abundance of enthusiasm and just couldn't ever be serious, employable or productive. All that was on their minds were putting on shows and going to the disco. I mean, that's what it always seemed like in the media. Gay guys could never have a hope for normal relationships and careers, consumed as they were with the things that made them unnaturally jubilant. Like Broadway and movie musicals, their Judy Garland collection, WIZARD OF OZ knick-knacks, gourmet cooking, children's beauty pageants, acting, designing women's fashion and interior decorating. Nothing useful to humanity. No wonder gay guys' families always disowned them. No wonder girls liked hanging around them (far more than they tended to hang around me).

I don't know what finally made me abandon my childhood theory of what gayness entailed. Possibly, when I caught an inkling of something called "lesbianism" and it just didn't fit the thesis.
Anyway, imagine what the boy Charles would have thought about BIG JOY: THE ADVENTURES OF JAMES BROUGHTON, a 2013 documentary that was sooooo gay...I don't even believe it was shown at the Cleveland International Film Festival. As it the CIFF wasn't gay enough for it. Now THAT'S f*@!ing damned gay.

Broughton, born in 1913, had docu-bait written all over him, I guess, being not only a minor gay/bisexual icon, but also being an early member of the West Coast "Beat" movement, and being an avant-garde filmmaker. I can't say the name of James Broughton triggered any shock of recognition when I heard it. I don't even recall reading his obituary when he died in 1999 (not an especially good year for me, either). But it seems that whenever you watch some Beat documentary with the jangly piano-jazz soundtrack, bad voiceover poetry and hand-held archival camerawork, you might be seeing some Broughton footage.

In BIG JOY, a California "performance artist" (uh-oh. To paraphrase a famous Nazi, when I hear the words "performance art" I want to reach for a revolver) named Keith Hennessy does a sort of high-speed chalkboard choreography at the outset tying James Broughton to Allen Ginsburg, Keroac and Neal Cassady (no relation, believe me). Broughton authored something called The Androgyne Journal (hey, I wrote a nice book called Great Lakes Folklore. Nobody's digging it much. Not gay enough, I guess), suffered an unhappy upbringing due to his gender confusion. Around college age he managed to date and even impregnate Pauline Kael, who would go on to become one of America's most feared (and much-married) film critics.

I wonder if that's why Kael titled one of her famous essay anthologies I Lost It At the Movies. Anyway, Broughton also turned to avant-garde filmmaking, sort of as a West Coat reflection of the East's Maya Deren. Broughton worked with California modern-dance troupes on film, and it seems one of Broughton's typically no-dialogue shorts, THE PLEASURE GARDEN, became a sensation at Cannes for its allegory of sensuality vs. prudish self-denial.

According to this, the short's success brought James Broughton offers to direct in Hollywood - but he declined. Wow, I thought, Charles Cassady endorses this message! We need more filmmakers who don't make films. But, no, Broughton just turned down Hollywood. He went on to do more avant-garde work, and teach cinema at the San Francisco Art Institute.

(Later, over in Michigan, some independent filmmakers did a highly obscure horror movie called DEATH BED: THE BED THAT EATS, about a killer bed. Which I mention only to emphasize the striking cultural differences between the sunny Bay Area and our gloomy Rust Belt.)

Broughton's offscreen life, meanwhile, was equally worthy of a Parental Advisory. Despite his bisexuality, he married Suzanna Hart and fathered three children (two of whom refused to be interviewed for this documentary). Late in life, however, Broughton left Suzanne for one of his much-younger film students - a man, Joel Singer, who here describes himself as a "homewrecker." To their credit, I guess, Singer and Broughton remained together in domestic bliss and film collaborations (one called DEVOTIONS commemorating their union) right up into the older guy's dotage and death.

I guess the irony of BIG JOY is that as much as Broughton seemed to stand for embracing one's inner sensualist and invoking Pleasure Gardens, California-hippie love, and a night of a living Bed, there was no shortage of misery, betrayed relationships and broken hearts along the way to Broughton's becoming a Beat/LGBT/counterculture hero. Or am I just being a Big Joy-killer?

The film is still pretty well put together, considering it was the result of three credited directors (Stephen Silha, Eric Slade, Dawn Logsdon), I will give it that. But in the end I was mainly just thrilled for the excuse to tell my story about my youthful misunderstanding of the term "gay." What did you all think the term meant when you were kids? Surely I wasn't alone in my profiling.
(2 3/4 out of 4 stars)