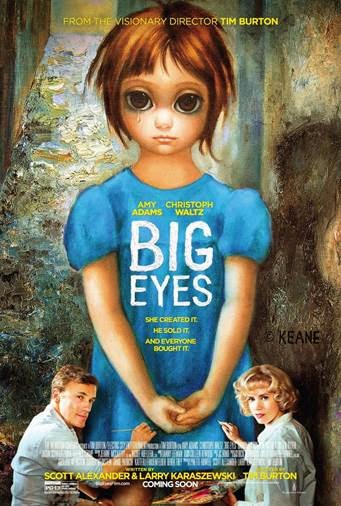 How do you define art? Is it something that pleases the eye, or must it meet certain aesthetic criteria? The issue is at the center of Tim Burton's BIG EYES, whose subject is the Keane paintings, those iconic pictures of children with outlandishly large, soulful eyes. (There were also dogs, cats, ladies, giraffes and other doe-eyed subjects.) If you were not around in the 1950s and '60s, you might not appreciate how ubiquitous these paintings were. What accounts for their popularity is that they seemed to capture something in the '60s zeitgeist – idealism coupled with despair, the kind of naïve sentiment expressed in a popular “hand-lettered” antiwar poster of the time that read, “War Is Not Healthy for Children and Other Living Things.” So great was the demand for the “Big Eye” images that they were widely imitated and sold as posters, greeting cards, stationery and figurines. I recall a pair of framed harlequins, a boy and girl, hanging in my sister's room, and I recently acquired a slightly chipped plastic cat with giant green eyes, marked “Made in Hong Kong.”

Though the paintings were disdained by art critics as kitsch, they commanded high gallery prices and were enthusiastically collected by celebrities, including Joan Crawford and Natalie Wood. Andy Warhol praised them, saying the fact that people like them so much makes them real art. A more recent Keane devotee is film director Tim Burton, who set out to tell the strange, true story of Margaret and Walter Keane in BIG EYES, starring Amy Adams and Christoph Waltz as the couple who produced the paintings. Burton has collected Keane paintings for years, and once commissioned Margaret Keane to paint a portrait of his then girlfriend, actress Lisa Marie.

BIG EYES is a departure from Burton's signature dark, macabre style. Aside from one brief scene with a fantasy element, it's a fairly straightforward telling of a particularly strange pop-culture anecdote. In later years, it emerged that Walter Keane, the putative painter of the Keane “big eye” paintings, was a fraud; it was his talented wife, Margaret, who devised the style and painted the pictures. Keane, a flamboyant huckster who reveled in his fame and wealth, denied until the end of his life that he had taken credit for Margaret's work.

Burton was originally the producer of the film, and Scott Alexander and Larry Karaszewski (of ED WOOD fame) were slated to direct, but Burton took the reins and enlisted Alexander and Karaszewski to write the script. Adams and Waltz took roles originally meant for Reese Witherspoon and Ryan Reynolds, which is probably to the film's advantage. Amy plays Margaret as a soft, recessive and unfailingly honest woman who's so sheltered she responds to a friend's offer of espresso with, “Is that like reefer?” Waltz brings an unusual quality to the part of Walter, a manic showman so persuasive he can convince the world that sad waifs move him to tears. Waltz's Austrian accent is a little jarring for this American-born character (Keane hailed from rural Nebraska), yet it adds a hint of malevolence that suits the character, who becomes so unhinged he threatens to have his wife whacked.

The film frames the narrative in feminist, socio-historical terms. A narrator, identified as reporter Dick Nolan, tells us that Margaret, with her young daughter Jane, walked out on her “suffocating husband,” Frank Ulrich, “before it was the fashionable thing to do.” Margaret settles in San Francisco, where she gets a job in a factory painting Humpty Dumpty on baby cribs. (A sign of the times: a potential employer asks Margaret, “Does your husband approve of you working?”) On weekends Margaret sells her paintings of sad-eyed girls, mostly based on her daughter, by the seashore. It is at the beach that she meets the charming Walter Keane, who is selling landscapes of Paris, where he claims to have lived and studied art. “What's with the big, crazy eyes?” he asks Margaret about her paintings. She explains, “Eyes are how I express my emotions.”

Margaret, who's never even been on an airplane, is impressed by Walter's worldliness, and they embark on a whirlwind romance. Walter proposes marriage, in order to halt her ex-husband's bid for custody of Jane. The couple honeymoon in Hawaii – “It's paradise!” she exults – and she is happy enough in her new marriage to ignore the warning of her friend, who says Walter is a womanizer who chased “every skirt in the art circuit”.

Keane's efforts to show his landscapes at a high-end gallery is met by rejection. Gallery owner Ruben (Jason Schwartzman) sniffs, “We don't go for that representational stuff. Clear out that clutter before the taste police arrive.” Not dissuaded, Walter displays his paintings, as well as Margaret's, at the very hip hungry i jazz club. Margaret's waifs are a sensation, and word of mouth spreads due to Walter's skillful manipulation of the press. He grabs the spotlight as the artist behind the paintings, while the retiring Margaret stands in the shadows, hidden in her home studio churning out paintings.

The paintings become so successful that the Keanes open their own gallery in San Francisco (followed, in real life, by another in New York.) A commission to paint a large mural for the 1964 New York World's Fair –—called “Tomorrow Forever” and featuring sad-eyed children from around the world –— ends in embarrassment after conservative New York Times art critic John Canaday (played in the film by Terence Stamp) pans Keane. Canaday wrote that Keane “grinds out formula pictures of wide-eyed children of such appalling sentimentality that his product has become...the very definition of tasteless hackwork. 'Tomorrow Forever' contains about 100 children and hence, is about 100 times as bad as the average Keane.” Embarrassed, the city asks Walter to withdraw the piece, and into storage it goes. (It should be noted that the contrarian Canaday also had no use for modern art, especially Abstract Expressionism.) In the movie, Margaret, under pressure from Walter, works herself to the point of collapse trying to complete the massive painting.

Walter threatens Margaret to keep her from revealing their secret, exploding with rage when her friend wanders into Margaret's home studio. Margaret keeps the secret even from her daughter, which makes her feel so guilty she goes to a priest for confession, even though she's not Catholic. Though she enjoys the expensive lifestyle afforded by the lie, it hurts her artistic pride to see Walter take credit for her beloved creations and to claim, as he did in interviews, that he was “haunted” by the “war-wracked innocents” he saw while living in Europe.

Eventually Margaret begins to question her husband's truthfulness. Did he really “study at the Beaux Arts” and live in Paris? Did he really paint those Parisian cityscapes, and come to think of it, did she ever actually see him paint?

Margaret finally got wise and in the mid-'60s took off with her daughter to Hawaii, where she became a Jehovah's Witness. In 1970, she decided to tell the truth about Walter and the paintings on a local radio show. “I am the only painter in the family,” she declared. The film compresses events into a single courtroom action following the couple's divorce. What actually happened took place over a number of years. In the 1980s, Walter sued Margaret for copyright infringement and claimed in a USA Today story that, believing he was dead, “the second of his three wives [Margaret] claimed to have done some of the Keane paintings.” Margaret sued the paper's publisher for libel and her ex-husband for slander and malicious prosecution. Walter counter-sued, again for copyright infringement. Margaret set up an easel and challenged Walter to produce a “Keane waif” in the courtroom, and while she painted a perfect picture in 53 minutes, he declined, citing a sore shoulder.

Margaret was awarded a $4 million judgment, which unfortunately she never got, since by then Walter had squandered his fortune.

Walter Keane died in 2000. Margaret, now 87, lives in California and continues to paint, her subjects having become much sunnier after her split with Walter. (Walter Keane's fame turned to infamy: his Wikipedia page identifies him as an “American plagiarist.”)

The impending release of this movie, it should be mentioned, has sent the price of Keane paintings skyrocketing. 3 3/4 out of 4 stars.
Posted by Pamela Zoslov at 12:01 AM