Wetlands (November 29th and 30th at the Cleveland Cinematheque) 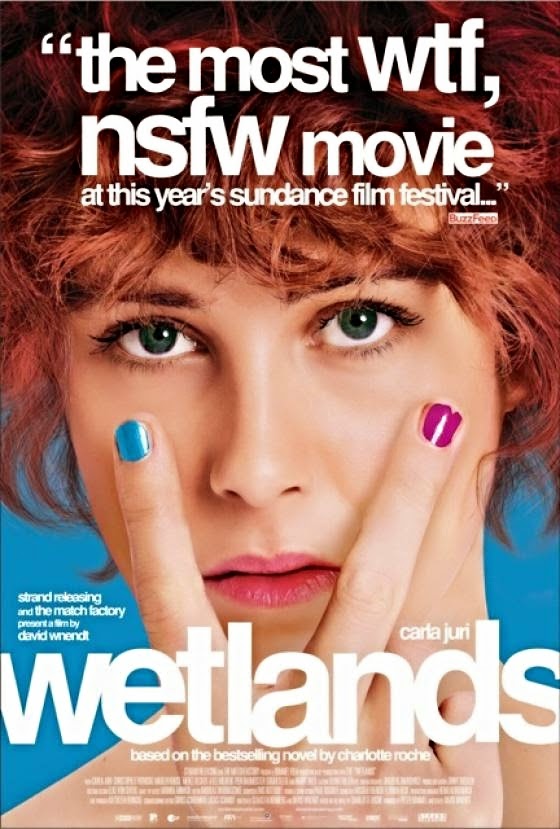 “If you think penises, sperm, and bodily fluids are gross, you should just forget about sex altogether.” So says seventeen year old Helen (Carla Juri), the protagonist of David Wnendt's WETLANDS, as she narrates her story. She might just as easily be talking about the film itself, though. Outside of an early John Waters comedy or straight up pornography, rarely has a movie so revelled in the excretions of the human body to the degree this one does, alternating eroticism with uncomfortable gross-outs.

While recovering, Helen makes a romantic connection with male nurse Robin (Christoph Letkowski) who is more intrigued than repulsed as Helen recounts various sordid episodes from her past. Helen also hopes to use her situation as a way to get her divorced parents back together. And then there are the strange flashes of memory that keep coming back while Helen sleeps in her room at night, hinting at some forgotten childhood trauma.

But the film's unhygienic humor is what sets it apart.

You may think you've seen or heard just about everything in modern comedies like THE HANGOVER, BRIDESMAIDS, and the JACKASS series, but trust me, you haven't. This is a German movie, folks, the only people that can give the Japanese a run for their money when it comes to putting weird kinks on film. The opening sequence in which Helen explains her bathroom habits will likely make all but the most jaded viewers cringe, featuring as it does a toilet to give the one in TRAINSPOTTING a run for its money. Of course it's not just that, but what Helen does in there, but you'll have to see the movie to find out.

Some of the subplots in WETLANDS seem to get short shrift, almost to the point where the movie might have been better off either without them, or if it had added a scene or two. In particular the childhood memory plotline seems like it should have more heft and importance. Instead the movie just races through its resolution without really explaining why it matters to the rest of the film. This being an adaptation of a novel, chances are the source material dealt with this in more depth, but Director Wnendt and his co-screenwriter Claus Falkenberg seem more interested in laughs and the love story. Thankfully that's more than enough to make for an entertaining film, albeit one that is certain to be offputting to a large portion of the population. 3 out of 4 stars.
Posted by Bob Ignizio at 12:58 AM