The Silence of the Lambs (November 7th at the CWRU Film Society, Strosacker Auditorium)

[THE SILENCE OF THE LAMBS screens Friday November 7th at 7:00 pm, 9:30 pm, and midnight at the CWRU Film Society, Strosacker Auditorium.] 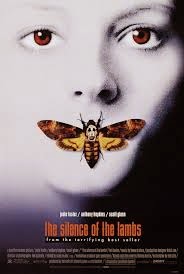 The entertainment media/pop-culture industry was making money off serial killers wayyy before THE SILENCE OF THE LAMBS (see Ripper, Jack the...), but the monster success of Jonathan Demme's 1991 thriller was taken by tastemakers to be something of a cultural watershed. Released in a spring movie-off season, the slick, satisfying, sinister picture was a box-office smash that won the Best Picture Oscar, making its murderous antihero Hannibal Lecter a much-imitated screen icon. And it gave film-critic-turned-right-wing-talk-show-host Michael Medved (hey, how do I get on board that gravy train? I need money too) exhibit A for his culture-wars book Hollywood vs. America.

True gore-horror fans probably hadn't seen anything in SILENCE OF THE LAMBS that they hadn't seen before, served up regularly by Dario Argento, for instance. And, for the benefit of you internet kids who still don't know that there were Star Wars movies made before PHANTOM MENACE, dig that THE SILENCE OF THE LAMBS was not the first Hannibal Lecter movie shocker. That honor belonged to Michael Mann's 1986 chiller MANHUNTER based on the same Thomas Harris novel that would later be done again, properly SILENCE-OF-THE-LAMB-icized, as RED DRAGON.

MANHUNTER didn't do much business, even though it had much the same premise as SILENCE OF THE LAMBS: a brilliant but diabolical therapist, Dr. Hannibal Lecter (played by Brian Cox in the 1986 film with Jekyll-Hyde mannerisms), imprisoned for acts of murder and cannibalism, duplicitously advises FBI lawmen tracking a serial killer at large.

Some fans even judge Brian Cox a better Lecter than Anthony Hopkins, who seems to be channeling more than a little a bit of Boris Karloff in the 1991 blockbuster. I dunno, whatever. For me the creepiest bits about the whole series are the ones in Thomas Harris' source novels. Especially the part about Dr. Lecter having neat little white teeth.

What detractors (with right-wing books to sell) overlook about SILENCE OF THE LAMBS is that the true central figure is not the lurking specter of Lecter but rather Jodie Foster's straight-arrow protagonist. She won an Oscar for her soulful portrayal of Clarice Starling, a young, idealistic FBI trainee from humble origins, sent in to consult with Lecter on a case. This time the quarry is a mystery slayer tagged with the nickname `Buffalo Bill,' because the victims - all plus-sized women - turn up partially skinned, with a death's-head moth inserted in their lifeless throats. And time is running out for the latest one.

Lecter, caged for eight years for his own acts of cannibalism and mayhem, won't cooperate with the veteran FBI agents on using his Sherlock Holmes-like powers (and some abnormal-psychology insider info from his old medical practice) on figuring out Buffalo Bill's whereabouts. But Clarice appeals to the deadly doctor, who feeds the young woman vital clues in trade for personal details about the wounds in her own past.

So - apart from the visceral suspense and grisly police antics - this film's strength is its girl power, having a very sympathetic heroine interacting with the serpentine Lecter and then going out to fight another human monster, in environments heavy with male-oriented threat and authority. Indeed, the horrendous Lecter treats Clarice with more courtesy and respect than most fellow officers and so-called `normal' men around her. As for Buffalo Bill, the freakish maniac is so off the human scale there's hardly any point (MAJOR SPOILER ALERT: after the story fakes you out about his lair, it's revealed that the sicko-mutant psycho goon Buffalo Bill operates out of Ohio, near Columbus. Which, to me personally, was no surprise. If it's a surprise to you, you obviously haven't lived in the Buckeye State for very long). SILENCE OF THE LAMBS thus has a complicated sense of virtue and evil coming to bargain with each other. While the consequence glorified an arch-villain in the public mind, the narrative does indeed possess a moral center.

When it came time to the inevitable book/movie franchise sequel, Hannibal, author Harris this time sort of monkey-wrenched the franchise by writing a gruesomely subversive novel in which Lecter (SPOILER ALERT II) succeeds in corrupting Clarice. The story goes that Jodie Foster was so revolted by her character going in that direction that she refused to encore in the movie, and was replaced by Joan Allen.

But since the movie HANNIBAL changed Harris' grim ending anyway, I would say a safe bet was just that Jodie Foster simply asked for too much money to return. I don't have to be a locked-up maniac myself to know what's what. Sometimes it sure feels that way, though. (3 1/4 out of 4 stars)