The Overnighters (November 25th at the Capitol Theatre - one show only!)

[THE OVERNIGHTERS screens Tuesday November 25th at 7:30 pm at the Capitol Theatre - one show only!.] 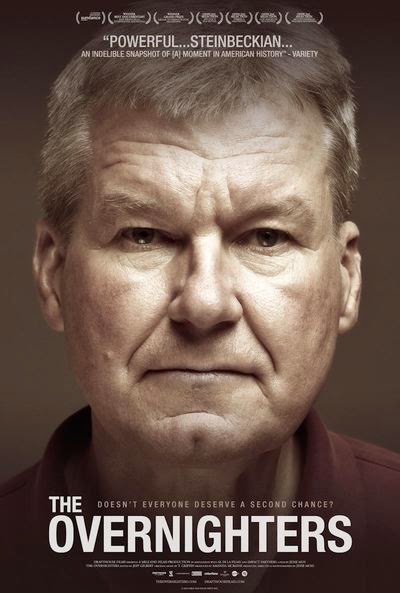 THE OVERNIGHTERS. As it turns out, though, getting a job may be easier than finding an affordable place to live. Feeling a responsibility to help, Pastor Jay Reinke allows the migrants to stay at his church, some inside, others living in cars and RVs in the parking lot. It may be the Christian thing to do, but not all of Reinke's parishioners (let alone the townspeople in general) are happy with Reinke's acts of charity.
A frakking boom floods the small town of Williston, North Dakota with job seekers from all over the country in Jesse Moss' documentary

As much the film sympathizes with the job seekers and Pastor Reinke, it is by no means a one sided piece of advocacy. Moss does his best to keep some perspective on the situation, and doesn't shy away from showing the negative impacts of housing all these people in a small town church located in a residential neighborhood. There are also some people the pastor has helped who feel he betrayed them, and that his outward facade hides a hypocrisy deep down.

Things get worse for Reinke and his program when it comes to light that one of the men staying with Reinke, in his home, it turns out, is a registered sex offender. Granted, the man in question was only guilty of having sex with his 16 year old girlfriend when he was 18, but when people hear “registered sex offender” they generally don't wait to hear the rest of the story.

There's little doubt to anyone watching this film that Reinke's program is far from the perfect solution to this problem. But what's the alternative? If the church is forced to stop housing these people, they'll just wind up staying somewhere else, and without the stabilizing influence of feeling like they're part of a community.

As difficult as it is for the town to deal with this situation, it also takes a toll the pastor and his family, and on the relationships of the men who have come seeking work. Is it worth it to try and help all these strangers if your family life suffers? What good is it to make good money if your loved ones feel abandoned?

Oh yeah, then there's the last few minutes of the movie in which a revelation comes completely from out of left field that can only be said to prove the old axiom that truth is, indeed, stranger than fiction. It's the kind of thing you almost wouldn't buy in a fictional story, and it makes what was already a greatly compelling film even moreso. 4 out of 4 stars.
Posted by Bob Ignizio at 12:00 AM