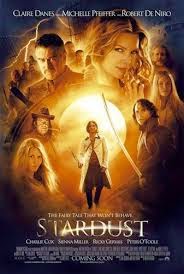 If you were to take THE PRINCESS BRIDE, subtract some of the satire and substitute the now-expected CGI hypergloss, you'd conjure up the 2007 release STARDUST (no relation to the 1974 David Essex-Ringo Starr rock drama of the same title), based on a novel by Neil Gaiman. It still skews more towards an affectionate semi-burlesque of fairy tales and fantasy. That Paramount wasn't sure what in the world to do with this stuff could be intuited by the ad campaign, which would have had you believe director Matthew Vaughn's STARDUST is some kind of stirringly heroic LORD OF THE RINGS adventure. The PR people in the picture racket these days would try to sell that David Essex-Ringo Starr rock drama as a stirring LORD OF THE RINGS adventure.

STARDUST's bedtime-story-for-grownups premise is that a 19th-century English village dubbed Wall borders a portal to a literal fairyland, a parallel-universe realm called Stormhold. In Wall, a youth called Tristan (Charlie Cox), secretly the child of a long-lost Stronghold princess, is smitten with a haughty town beauty (Sienna Miller). He promises to bring her a genuine falling star they witness, as token of his high-Victorian gushing sentiment, and journeys through the gap from Wall into Stormhold.

But what Tristan doesn't know is that the star that happens to fall into Stormhold is actually part of a magical spell cast by the dying king (the late Peter O'Toole, in a short bit here). He assigns his murderously competitive sons to find the royal jewels now intertwined with the star.


Furthermore, in Stormhold, where sorcery prevails over science, fallen stars are not space debris but angel-like women, this one portrayed by Claire Danes with diva-goddess attitude. In addition to Tristan and black-clad Septimus (Rupert Everett), most ruthless of  the king's heirs, the star is sought by the witch Lamia (Michelle Pfeiffer), one of trio of ancient hag sisters, who seek to literally eat her heart to regain their youth.

Pfeiffer is gloriously photographed as the ancient crone temporarily restored to radiance by sorcery (if this movie had sold more tickets, there would have been a flurry of phone calls for "star hearts" at every plastic surgeon's and astronomer's in Beverly Hills), and the lush color and filigree is also quite attractive. Just get it through your Bronze-Age helmets that this isn't Conan stuff we're talking here.

Strewn along the slightly twee path Tristan and his reluctant captive star blaze through fairyland are a unicorn, a goat-boy, a bird-girl, a Greek chorus of ghosts, and a cross-dressing sky-ship captain, played with pirate mannerisms by Robert DeNiro, who matches the UK cast with their Christmas-panto performances. Come to think of it, the goat-boy is also changed into a goat-boy-girl for a while. Harry Potter and the Queer Transgender Subtext, anyone?

It's fairly harmless fairy fun, though, even with one anticlimax too many. If there are any couples out there who use dewy fantasy films as date flicks this one makes a tolerably entertaining late-summer night's dream. (2 3/4 stars out of 4)