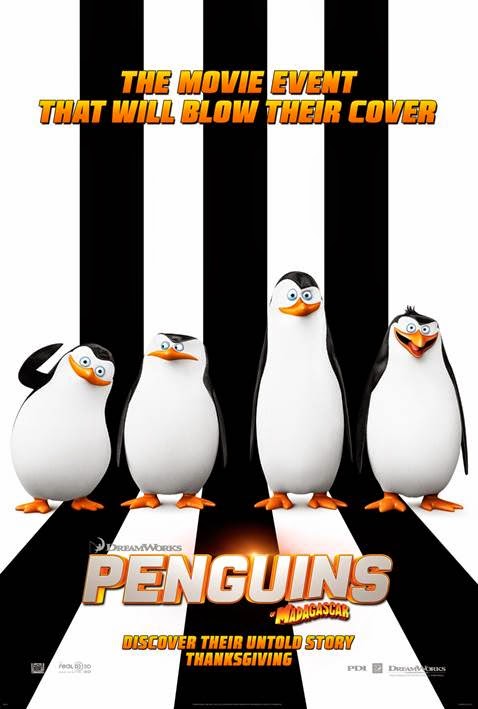 Having previously appeared in the three MADAGASCAR feature films and being spun off into a TV series on Nickelodeon, the PENGUINS OF MADAGASCAR now get their own feature film. The plot involves an angry octopus named Dave (voice of John Malkovich) trying to get revenges on Skipper (Tom McGrath), Kowalski (Chris Miller), Rico (Conrad Vernon), and Private (Christopher Knights), collectively the Penguins of the title. Seems as though every time Dave would settle in to a zoo, marine park, or aquarium and win over the adoring public, the penguins would be shipped in and steal his thunder. There's just no way a homely cephalopod can compete with such plucky cuteness.

Dave's plan is to kidnap all the penguins in captivity and turn them ugly using some kind of green ooze and a mad scientist death ray machine. Skipper and his crew figure they can handle things on their own, but like it or not they have to work alongside a team of secret animal agents known as North Wind – gray wolf (and team leader) Classified (Benedict Cumberbatch), seal demolitions expert Short Fuse (Ken Jeong), owl intelligence analyst Eva (Annet Mahendru), and for muscle, polar bear Corporal (Peter Stormare).

The plot and themes aren't much to write home about – just your standard issue kiddie action fare where the two groups of good guys have to learn to respect and work with each other, and come to see the value in what is seemingly the least among them. The jokes come fast and furious, though, ranging from sophisticated satire to really bad puns. An early gag involving a documentarian (Werner Herzog, voicing a character based on himself) was the humorous high point. Those who are familiar with Herzog will get an extra kick out of the bit, but it's done in such a way that it's funny even if you aren't familiar with the German filmmaker. Most of the laughs are far less esoteric, depending largely on slapstick, excessive cheese snack consumption, and a running gag in which Dave orders his henchmen to attack in ways that recall various celebrities (“Nicholas, cage him!”).

There's nothing especially memorable about PENGUINS OF MADAGASCAR (aside from the Herzog gag), but it's a pleasant enough way to spend 90 minutes. No one should have any illusions that this is going to be a timeless classic on par with the best of Disney or Pixar, but as far as corporate product goes it's well crafted and funny. For post-Turkey Day entertainment, it'll do.
Posted by Bob Ignizio at 12:01 AM